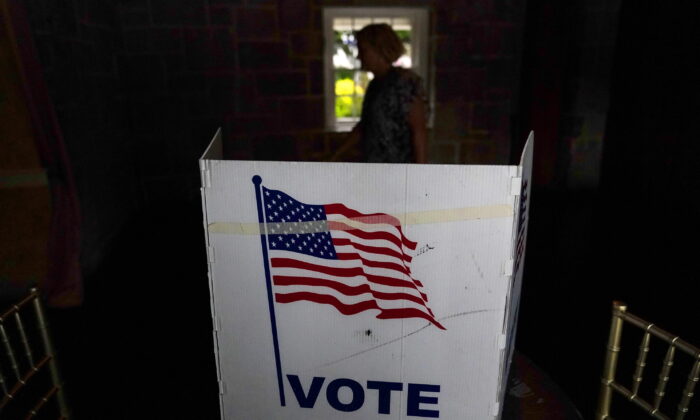 FILE - A person waits in line to vote in the Georgia's primary election on May 24, 2022, in Atlanta. More than 1 million voters across 43 states have switched to the Republican Party over the last year, according to voter registration data analyzed by The Associated Press. (AP Photo/Brynn Anderson, File)
2022 Midterm Elections

Aadland, who has worked as an oil and gas industry project manager for the last decade, will take on state Sen. Brittany Pettersen, a Democrat, in November’s general election.

Pettersen was unopposed in the Democratic primary after qualifying for the ballot through the assembly process. Political parties in Colorado conduct preliminary county, district, and state-level assemblies to designate primary candidates. Candidates can also petition for direct access to the primary ballot.

Pettersen was placed on the ballot in assembly votes, and no challenger petitioned to face off in a primary. Her nomination was assured when she garnered the endorsement of retiring Rep. Ed Perlmutter (D-Colo.).

Perlmutter has represented CD 7 for 16 years, but post-2020 Census redistricting has made what had been a Democratic stronghold more competitive for Republican candidates.

The refashioned CD 7 no longer includes some Denver suburbs while adding rural mountain areas to the mix.

According to the Colorado Secretary of State Office, as of May 1, there are 142,996 registered Democrats, 128,404 registered Republicans, and 234,980 registered voters unaffiliated with any party in the new district.

Despite a D+6 rating, the number of independent voters makes the district “competitive,” according to FiveThirtyEight. The Cook Partisan Voting Index rates CD 7 “likely Democratic” but also “competitive.”

Those independents—44 percent of about 515,000 registered voters—will determine who wins in November, not only in CD 7 but in local, state, and congressional elections across Colorado, where 46 percent of the state’s 3.73 million voters are registered as unaffiliated with a party.

Independent voters can also essentially chart what candidates win primaries since Colorado law allows them to cast ballots in one primary of their choice.

Aadland told The Epoch News last week that appealing to independent voters in the district was a cornerstone of his strategy in distinguishing himself from opponents who touted similar conservative America First agendas that addressed border security, election integrity, gun-owners rights, school choice, parents’ rights, restricting abortion, support for law enforcement, and the reversal of Democratic energy policies.

Aadland said he checks all the boxes for CD 7 conservative voters but can win in a general election in the blue-tinged purple district because he is the only veteran and oilfield worker in the race—characteristics that voters will identify with.

He said that veterans are “absolutely” garnering voters’ interest because “veterans have demonstrated service” and the proven capacity to work through ideological differences to produce tangible results that benefit all.

“We need people of character, and veterans have demonstrated that,” Aadland said.

Arland, Reichert, and Imer all campaigned as political newcomers representing something new and dynamic in the party.

Reichert, who contributed $500,000 to his campaign, said he had no tolerance for “career politicians who have stopped working for Coloradans” and only entered the campaign after developing an eight-point plan —Handshake with the Middle Class—designed to “help restore the Middle Class.”

Imer, a grassroots activist with “real-world experience” as a small business owner and home-school mom, was the first to declare in the race, even before Perlmutter announced his retirement, and told The Epoch Times last week that her string ground game would prove to be the difference.

“I’ve been on the ground for a year-and-a-half,” talking with voters who are “itching for someone new, something different,” she said.

In Pettersen, Aadland will face a veteran progressive activist active in state campaigns for more than a decade. Elected to the state Senate in 2018, she was set to run for CD 7’s congressional seat in 2020 before Perlmutter decided to seek an eighth term.