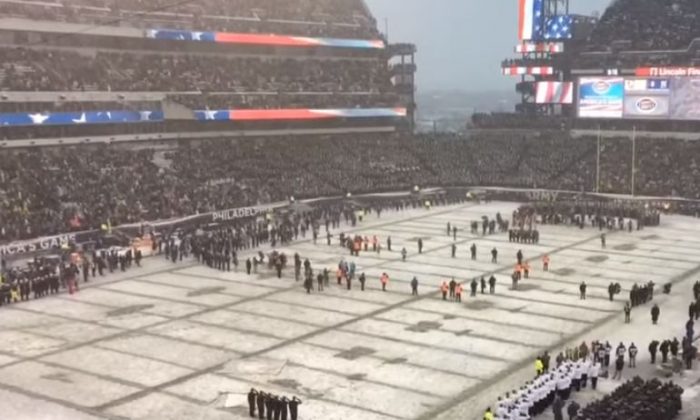 The U.S. Military Academy and U.S. Naval Academy met for their yearly football game on Saturday, called the “Army-Navy Game.”

It was the 118th meeting between the two teams—considered among the most storied traditions in sports. The teams often play in front of active duty and former military members.

This is how it's done! The National Anthem at yesterday's Army-Navy Game will give you chills. ?? pic.twitter.com/XpjPEIzcmm

A number of people focused on the U.S. national anthem at Philadelphia’s Lincoln Financial Field.

Before the game, choirs of both the Annapolis and West Point academies sang the national anthem together.

In light of the controversy surrounding NFL players kneeling during the anthem, the crowd appeared to love it.

An awesome national anthem at yesterday’s #ArmyNavy game. Congratulations to Army on a great game – as a Navy veteran I’m proud of both teams. https://t.co/3Tcr9jvVKs

There was speculation that Army’s white uniforms provided a type of “camouflage” during the snowy game.

“Did Army anticipate the swirling snowstorm that dominated the game or did they just get lucky? CBS television announcers joked about how hard it was for them to see the Army players on the field and Navy’s Blue Angels-inspired gear was probably visible from space against the snow-covered field,” Military.com noted.

It doesn't get any better than #ArmyNavy.

The Black Knights enjoyed the moment of a lifetime after winning the Commander's-in-Chief Trophy for the first time in 21 years. (with @USAA) pic.twitter.com/vl59T1Cq7l