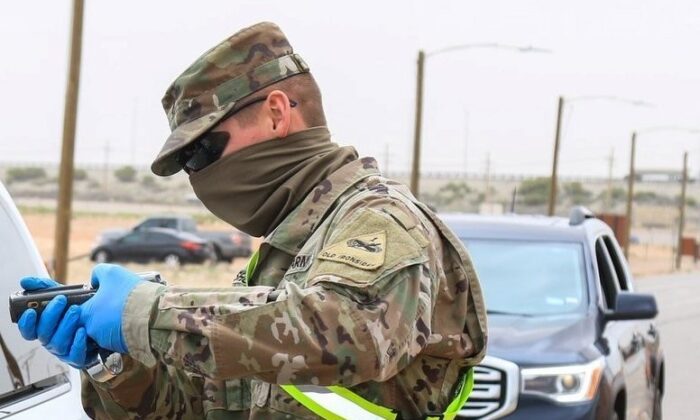 A soldier wears a makeshift face covering at a checkpoint in this handout image from April 6, 2020. (Department of Defense)
AMERICA

Secretary of the Army Ryan McCarthy confirmed Wednesday that a Virginia mortuary affairs unit would be deploying to New York City to help with the handling of human remains.

McCarthy was cited by Defence Blog as telling soldiers at a base in Fort Lee, Virginia, on April 8,  “I can guarantee you’re going to go.”

The announcement came as New York City, which has been hardest-hit by the virus, saw its biggest single-day toll so far from the CCP virus pandemic, with New York Governor Andrew Cuomo announcing 779 deaths in a 24-hour period.

“Every number is a face,” said Cuomo, who ordered flags flown at half-staff across New York in memory of the victims.

U.S. deaths due to the CCP virus, commonly known as the novel coronavirus, topped 14,700 on Wednesday, according to a Reuters tally.

New York state accounts for over a third of the U.S. total.

“Between now and the time you’ve got to get in that truck and go, get your mind right. Get your families right. Get everything in balance because you’re going to deploy and it could be a while,” McCarthy told members of 111th Quartermaster Company on April 8.

The company said in a statement that the was ready to deploy.

“The Soldiers of the 111th were able to brief these senior leaders on the capabilities of the company while in a deployed environment, as well as how we can support a quick response to COVID-19. 111th remains ready to deploy anywhere to provide Mortuary Affairs support at all times!” the mortuary affairs unit said.

In New York, “DOD is working hard to crush the spread of the virus,” a Pentagon press release said.

Officials have warned Americans to expect alarming numbers of COVID-19 deaths this week, even as an influential university model on Wednesday scaled back its projected U.S. pandemic death toll by 26 percent to 60,000.

“We are in the midst of a week of heartache,” Vice President Mike Pence said during a White House briefing on Wednesday, but added, “we are beginning to see glimmers of hope.”

Overcrowded mortuaries are a problem in parts of the country as cities struggle to meet demand for storage of the dead and families wrestle with rules on social distancing that make the usual funeral rituals impossible.

Med Alliance Group, a medical distributor in Illinois, has been besieged by calls and emails from cities around the country requesting refrigerated trailers for storage of bodies.

“They have been involved and continue to be involved unfortunately in the mortuary affairs,” Lengyel told reporters on Wednesday during a briefing call.

“I mean a normal day without COVID, you may know that 25 people must be removed from the homes where they died,” said Lengyel.

“These numbers have increased dramatically, and 150 people a day have to be taken over by mortuary affairs and we are concerned—we have National Guard units that are trained to do so, so that people can be—human remains treated with dignity and respect,” he added.

Lengyel said in the briefing that the National Guard represents about 75 percent of the total military personnel “serving on the front lines of this fight against COVID-19,” with nearly 28,400 men and women engaged in the response. He said to expect that number to increase over the coming weeks.

Lengyel said that as of Wednesday morning, 349 National Guard members were COVID-19 positive.

In the same briefing, Army Brigadier General Keith Waddell urged members of the National Guard serving on the front lines of the pandemic to stay active and positive to avoid getting overwhelmed.

“It is easy to get immersed and consumed by this response. I urge everyone to find something else to do throughout the day when time permits, whether it’s exercise, reading, gaming, watching a movie or working in the garden, do something else to clear your mind and body.

“We all need to stay fresh for the duration of this incident,” he said.