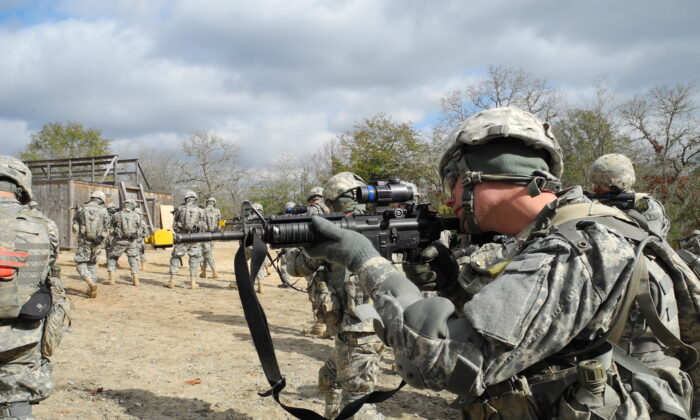 The U.S. Army has identified two Georgia-based soldiers who died in a weather-related incident on Tuesday while training on Yonah Mountain in Dahlonega, northern Atlanta.

In a statement released by U.S. Army Fort Benning, officials said Staff Sgt. George Taber and 2nd Lt. Evan Fitzgibbon were killed after a falling tree struck them when severe weather forced them to shelter in place.

Two other service members suffered non-life threatening injuries, while a third soldier required hospitalization. The soldiers were treated at the scene before being transported to an area hospital, where the third soldier was listed as stable.

Taber and Fitzgibbon were pronounced deceased at the hospital.

“Our heartfelt thoughts and prayers are with the families, friends, and leadership of these two outstanding leaders who unexpectedly lost their lives in the pursuit of excellence,” per the statement.

Taber, 30, had served in the Army since his enlistment in March 2017. He was a Special Forces Medical Sergeant assigned to the 7th Special Forces Group at Eglin Air Force Base in Florida.

Col. Kevin Trujillo, commander of the 7th Special Forces Group, said Taber “was an exemplary” Green Beret and will be sorely missed.

Fitzgibbon was a West Point graduate and was commissioned in May 2021. He was an infantry officer assigned to the Infantry Basic Officer Leader Course, 199th Infantry “Leader Brigade” at Fort Benning in Georgia.

A spokesperson for the Army told FOX5 Atlanta that the soldiers were part of the training program at the Maneuver Center of Excellence, a military entity created in 2005 to consolidate a number of schools and installations to produce “Centers of Excellence.”

Shortly after 3 p.m. on Aug. 9, the local network tracked a severe thunderstorm that prompted a warning from the National Weather Service. The storm, which was brewing over Yonah Mountain, was capable of producing quarter-size hail and 60 mph winds.

Mike LeFevre, the fire chief of White County, told the network that firefighters received a report of downed trees on the mountain, but there were no immediate reports of injuries associated with it.

The Army conducts training on the mountain, including the Ranger School’s Mountain Phase. Soldiers who train on the mountain typically will report out of Camp Merrill in the northern part of Georgia.

This is the second deadly incident involving soldiers stationed in Georgia in the past month. In late July, Sgt. 1st Class Michael D. Clark was killed by a lightning strike at Fort Gordon near Augusta. Nine other soldiers were also injured in the incident.