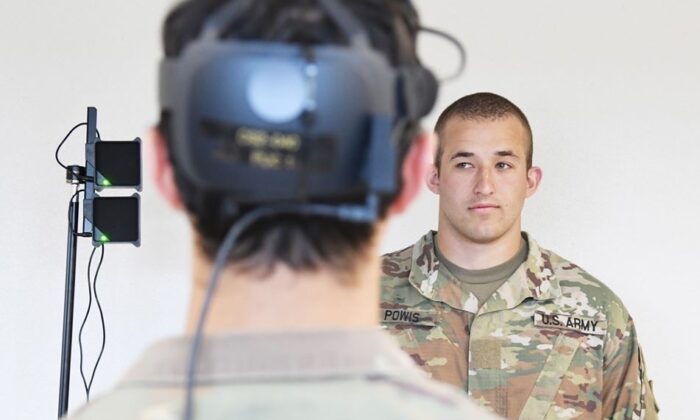 The temperature of a soldier training at Fort Benning, Ga., is taken by a sensor in a modified version of the Integrated Visual Augmentation System, known as IVAS goggles, in this undated handout. (Bridgett Siter/DoD)
US News

The Army has hacked its prototype combat goggles to rapidly “see” the temperatures of recruits and detect the telltale fever of the CCP virus.

Integrated Visual Augmentation System (IVAS) goggles are the signature device in the plan to modernize weaponry carried by soldiers.

Based on Microsoft’s HoloLens 2, the prototype projects digital images and information onto a see-through screen.

Last week, the project’s night vision lab director was struck with a thought: Could the goggles’ digital thermal sensors be used to turn the device into a thermometer to monitor for COVID-19?

Four days and a software tweak later, and the IVAS goggles were being used to screen hundreds of recruits per day.

The adaptation of the IVAS, which is the flagship device of the Soldier Lethality modernization program, was announced on April 27.

“Day after day and through the weekend, Soldiers in groups of more than 200 and 300 filed through the processing center, where they paused for five seconds facing a soldier wearing an IVAS goggle with sensors that detect the forehead and inner eye temperature,” the Army said in a statement.

“The Soldier’s temperature registered in the operator’s see-through, heads-up display, a method that proves more economical and sanitary than the use of traditional thermometers.”

The goggles are still a prototype and not rugged enough to be used outdoors, where fluctuating temperatures, for now, prevent reliable fever detection, according to Tom Bowman, the director of IVAS Science & Technology Special Project Office whose flash of inspiration led to the modification.

“We’ve always planned for an agile software system and a digital platform that can be upgraded and adapted to use against emerging threats in the future. No one anticipated the next threat to emerge would be a virus, but that’s the enemy we face today,” said Bowman in a statement.

Like other areas of society, the military is currently grappling with supply-chain and manpower issues as it tries to keep its modernization and procurement programs on track.

The IVAS team had been forced to juggle design and study phases to cope with supply-chain issues, and it was announced only last week that the issues had been resolved and the program schedule remained on track to field the goggles by next year.

The IVAS was able to assess 300 soldiers in just half an hour, according to the Army.