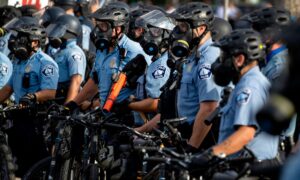 The U.S. Army has awarded Heroism Medals to the junior ROTC cadets killed in the Florida school shooting last week.

The three JROTC cadets were killed on Feb. 14 in Parkland when Nikolas Cruz shot up Marjory Stoneman Douglas High School.

Besides the cadets, 14 others died.

But the cadets were recognized for helping save lives, particularly Peter Wang, 15, who eyewitnesses said held a door open so that students could escape the scene faster.

Also killed were Martin Duque and Alaina Petty, both 14.

Calls had been made for a military funeral for the cadets and a spokesperson for the Army told the Daily Beast that the Army gave a Medal of Heroism to each slain student.

It is with broken hearts that Sunrise Post 365 & Stoneman Douglas JROTC shares the loss of our soaring eagles! We honor them, and will miss their courage, tenacity, and their smiles! Cadet Peter Wang, Cadet Martin Duque, and Cadet Alaina Petty. May they always soar high! pic.twitter.com/eg0TKprzMV

Duque’s family will be given his medal on Saturday, reported the Daily Beast.

The medal recognizes cadets whose performance “involved the acceptance of danger and extraordinary responsibilities.”

A spokesman for the Army told Fox News that Wang’s medal was going to be on his uniform as his family requested that he be buried in it.

“The JROTC Heroism medal will be on his uniform, but a second ‘keepsake’ medal will be given to his family,” Michael Maddox said.