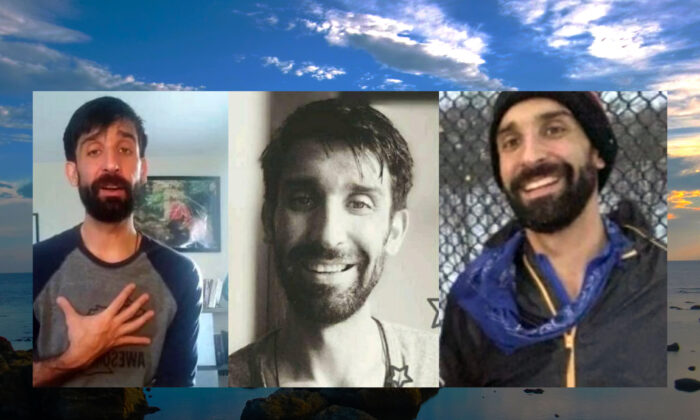 Matthew Perna, 37, took his own life on Feb. 25 after more than a year under the cloud of criminal charges from his visit to the U.S. Capitol on Jan. 6, 2021. (Background image: Matt Perna/Flickr; Left and right photos: Tayler Hansen/Twitter; center photo: Geri Perna)
US News

The U.S. Army Corps of Engineers will not issue a permit for a planned 5K memorial run honoring the late Jan. 6 defendant Matthew Perna to cross the Shenango Dam near Sharpsville, Pennsylvania, saying it presents “security concerns” and could make it appear the corps endorses a political event in an election year.

Perna committed suicide on Feb. 25, 2022, after a 14-month ordeal with federal prosecutors who sought to jail him for more than four years.

He will be remembered at the Matthew Perna Freedom 5K on Oct. 15.

The original race route included crossing the nearly 70-foot-high Shenango Dam built by the Corps of Engineers from 1961-65 for regional flood control.

Geri Perna, Matt Perna’s aunt, said she received a denial email from the Army Corps of Engineers just after 10 p.m. on Aug. 22. “Talk about kicking us when we’re down,” she told The Epoch Times.

Matt Perna was an avid trail runner from nearby Sharon—about 70 miles northwest of Pittsburgh—whose route often crossed the Shenango Dam. At his funeral, friends approached Geri Perna with the idea of a 5K memorial run.

After the rejection by the Corps of Engineers, Perna said the nearby city of Sharpsville agreed to host the race instead. “We are extremely grateful to announce that our race will go on as planned in Sharpsville, where everyone is welcome to participate,” she said.

“This race was thought of by the group that Matt ran with,” Perna said. “They approached me at the funeral, ‘We’d love to do a memorial run in Matt’s name.’ So that’s when it started. This is not a political event.”

The goal is to support suicide prevention and foster awareness of mental illness, she said.

“Matt fed his spirit and soul by running countless miles on as much of the world’s landscape as he could get his feet on,” Perna wrote on the 5K race website.

In all of the previous discussions with officials at Shenango River Lake, Perna said, no one expressed any concerns about issuing a permit for the race.

“When they submitted the application to the people in charge, they denied it,” Perna said. “I didn’t get notice of this until last night. The race is on Oct. 15. We already have people registered for it. I’m just livid.”

A letter from Shenango River Lake resource officer William Spring said Matt Perna’s connection to the Jan. 6 unrest in Washington was a factor in denying the permit.

“Although your event has the salutary purpose of raising awareness for suicide prevention and supporting mental health, the event is also linked to the events at the U.S. Capitol on Jan. 6, 2021,” Spring wrote.

In a statement to The Epoch Times, the Corps of Engineers defended the decision, saying the Matthew Perna Freedom 5K will be a political event that would violate the agency’s regulations.

“Per Corps regulations, to qualify for a special event permit, an event must contribute to the public’s enjoyment and comply with established land use classifications,” the statement read. “In this case, the apparent purpose of the Matthew Perna Freedom 5K is to further and promote the activities of a special interest group with a specific political—rather than strictly recreational—purpose.”

The Corps of Engineers takes a neutral stance on all political activities, the statement said.

“Shenango Lake Dam is not equivalent to the National Mall, a location that is frequently the site of politically themed events.  However, the federal government and the public are interested in maintaining a recreationally focused atmosphere at federal facilities established for recreational activities, including Shenango Lake and the dam.”

Perna said calling the run a political event is wrong.

“I would ask them where in our description of the race on does it mention a political party?” she said. “Where does it say that anyone is excluded from participating?”

Perna said the January 6 advocacy group Patriot Freedom Project agreed to handle the funds for the 2022 race because the Matthew Perna Freedom Foundation does not yet have IRS recognition as a 501(c)(3) charity.

Geri Perna said she was told by a corps official that allowing the 5K run would be a violation of the Hatch Act.

Signed into law in 1939, the Hatch Act “limits certain political activities of federal employees, as well as some state, D.C., and local government employees who work in connection with federally funded programs,” according to the U.S. Office of Special Counsel.

Perna said the permit decision is more of the same kind of treatment her nephew received from the Department of Justice, which charged him with felony obstruction of an official proceeding and several misdemeanors for his time walking through the Capitol on Jan. 6.

He pleaded guilty to all charges because he just wanted the case to be over, Geri Perna said.

The anguish of the long process—and the last-minute decision by prosecutors to seek up to 51 months in prison for someone who committed no violence and damaged no property—made her nephew despondent and led to his death, Geri Perna said.

“He may have killed himself, theoretically,” she said in February 2022. “But they got to him first.”

Perna said 30 minutes after she received the original email about the permit denial, another email arrived attempting to recall the first email. The official issuing the recall request told her the original communique was sent prematurely, Perna said.

“I said to her, ‘Were you waiting for the week before the race to tell us?’ ”