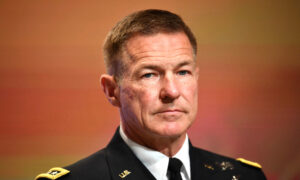 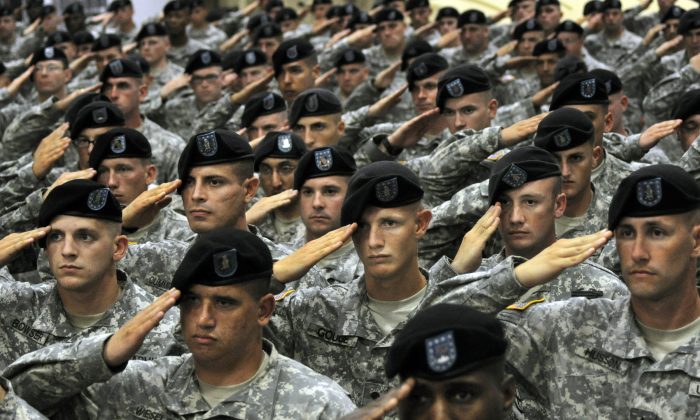 Soldiers from the 10th Mountain Division saluting during the National Anthem in Fort Drum, N.Y. (Heather Ainsworth/AP Photo)
US News

A number of videos produced by military chaplains offering prayer during the CCP virus pandemic have been removed from Facebook following complaints.

The four videos were uploaded in March and April to the official Facebook page of the U.S. Army’s 10th Mountain Division Sustainment Brigade at Fort Drum, New York, by Captain Amy Smith and Major Scott Ingram.

They were removed after a watchdog group, Military Religious Freedom Foundation (MRRF), complained that the videos amounted to “illicit proselytizing” of Christianity. The group describes itself as “dedicated to fighting for the Constitutionally Guaranteed Separation of Church and State for our U.S. Military Service Members.”

In a demand letter (pdf) sent to the commander at Fort Drum this week, MRFF founder and president Mikey Weinstein claimed the videos violate the Establishment Clause of the First Amendment.

In one of the videos dated April 2, Ingram made reference to the CCP (Chinese Communist Party) virus pandemic, saying: “God encourages us not to be dismayed by what we see around us, things we cannot control. We can, however, with the best intel in this moment, place our trust in him, walk forward in his strength, and treat others with kindness,” Fox News reported.

In another video, Smith tells viewers they should visit the Fort Drum Labyrinth to hear God’s voice.

MRFF said the videos should not have been posted to the brigade’s official Facebook page, but to “The Fort Drum Chapel” Facebook page.

The MRFF had “to make these obviously valid demands to ensure church-state separation…on behalf of aggrieved Army personnel who justly fear reprisal, retribution, revenge, and retaliation for taking their grievances up the chain of command,” Weinstein told The Christian Post.

The group said the videos were removed from Facebook a few hours after they sent the demand letter.

“I personally spoke on the phone this morning to the senior leadership staff of [Maj. Gen.] Brian Mennes, the 10th’s Commanding General, as well as subordinate senior staff of [Col.] Matt Bresko, the Commander of the 10th Mountain Division Sustainment Brigade,” Weinstein said in a statement Monday.

“These senior Fort Drum staffers were professional and courteous and seemed to understand well the position of MRFF in advocating for our active duty Army clients under their command.”