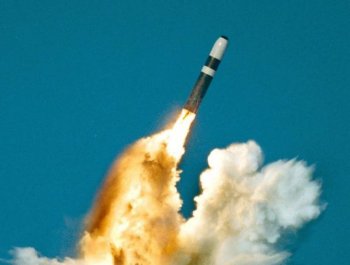 A US Trident Ii, or D-5 missile, which when deployed carries a W-88 nuclear warhead, is test fired in this file photo. (AFP/Getty Images)
International

Marco t'Hoen
View profile
Follow
biggersmaller
Print
Following the recent approval by the U.S. Senate of the Measures for the Further Reduction and Limitation of Strategic Offensive Arms [also known as the new START] between the United States and Russia, the Russian Parliament will now begin its review process this week.

Russia's lower House, or State Duma, is scheduled to begin the review process on Friday, Dec. 24. “There is some information that the resolution contains a number of conditions,” State Duma Speaker Boris Gryzlov said, according to the Russian state-run RIA Novosti News Agency. “If the conditions do not affect the text of the agreement, then we can ratify the treaty tomorrow. If the Russian President Dimitry Medvedev text of the basic agreement has some changes, then we need to work on this issue," he said.

U.S. President Barack Obama and signed the New START treaty on April 8, as a continuation of the first START which expired on Dec. 5, 2009. The new START calls for a reduction of 1,500 nuclear warheads From each country, as well as other stipulations. A blog on the Heritage Foundation site stated that the treaty also contained restrictions concerning the use of missile defense systems.

During the recent political process that resulted in ratification of the treaty by the U.S. Senate, President Obama and supporters of the new START worked hard to convince the GOP and holdout senators to approve the treaty. The president committed to a 10-year, $85 billion dollar maintenance and modernization plan on warheads and materials to maintain stability and effectiveness, and address concerns by senators over the existing nuclear stockpile.

The Senate adopted a last-minute resolution with which to ratify the new START, with a vote of 71 to 26 in favor of the bilateral pact, a little over the necessary two-thirds majority.

With the collective number of warheads from both countries being by far the largest number of warheads in the world—according to an estimation by the Federation of American Scientists—the pressure to continue enactment of the treaty runs high. U.K. Foreign Secretary William Hague said in a news release that adoption by the U.S. Senate was a welcome step. He added that “this treaty will contribute to increased trust and security for all,” with the United States and Russia together holding 90 percent of the world's nuclear weapons.

With one party—the United States—ratifying the treaty, all eyes are now on Russia. “A positive outcome of the vote is expected to happen,” the RIA Novosti news agency wrote. Only a small number of Duma members have spoken out against ratification of the new START, the news agency reported.