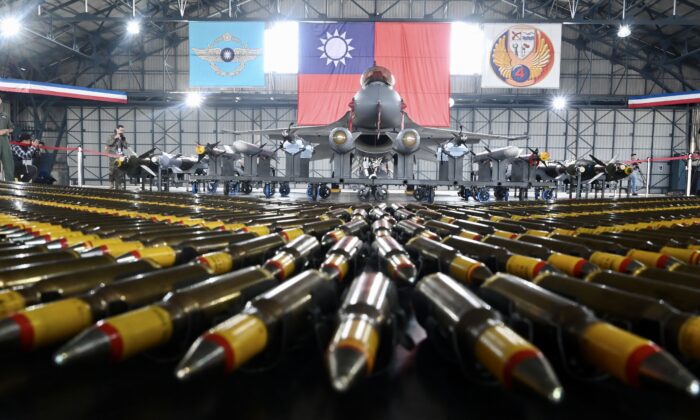 A U.S.-made F-16V fighter jet with its armaments is on display during an exercise at a military base in Chiayi, southern Taiwan, on Jan. 15, 2020. (Sam Yeh/AFP via Getty Images)
Arms Race

The overall number of major international arms sales declined during the last five years, but arms imports spiked sharply in nations throughout Asia and Oceania. Experts correlated the increases to a combination of tension regarding China’s growing military and the United States’ foreign policy.

Australia, Japan, and South Korea all saw large increases in major arms imports for the period of 2017-2021 as compared to 2012-2016, according to a new report by the Stockholm International Peace Research Institute (SIPRI).

Arms imports grew in Australia by 62 percent, in South Korea by 71 percent, and in Japan by 152 percent, reflecting ongoing tensions with the Chinese communist regime throughout both Asia and Oceania.

“Tensions between China and many states in Asia and Oceania are the main driver of arms imports in the region,” said Siemon Wezeman, a senior researcher at SIPRI, in an associated statement. “These tensions are also a major factor in US arms transfers to the region.”

American arms exports to the region are a critical component of the current U.S. strategy for maintaining a free and open Indo-Pacific. Imports from the United States accounted for the largest arms transfers to Australia, Japan, and South Korea.

Asia and Oceania remained the largest importing region, according to the report, and received 43 percent of global arms transfers. Six states in the region were among the 10 largest arms importers in the world: Australia, China, India, Japan, Pakistan, and South Korea. Some 30 percent of all imports to the region came from the United States.

The United States has sought to strengthen its alliances and partnerships in the region. Washington’s new Indo-Pacific Strategy places a premium on building regional coalitions against Chinese communist aggression, including China’s ongoing military intimidation of Taiwan and hostilities with India.

The report also comes at a time of increased tension between China and the United States.

New allegations from within the State Department claimed in March that the Chinese Communist Party signaled it was willing to lend military assistance to Russia’s ongoing invasion of Ukraine, sparking fears that Ukraine could be used as a proxy war between the United States and China.

A former senior State Department official said, meanwhile, that China and the United States were in a new Cold War. And national intelligence leaders have accused the Chinese communist regime of seeking a new world order.

The nations growing their arms imports are not limited to those in Asia and Oceania, however.

In fact, the largest growth in arms imports occurred in Europe, with the UK, Norway, and the Netherlands leading a new buildup of weapons in the West.

“The severe deterioration in relations between most European states and Russia was an important driver of growth in European arms imports, especially for states that cannot meet all their requirements through their national arms industries,” said Pieter Wezeman, a senior researcher for SIPRI.

All things considered, the United States, China, France, Germany, and Russia accounted for more than three-quarters of all arms exports globally. The largest exporter of arms was the United States. China was the fourth.