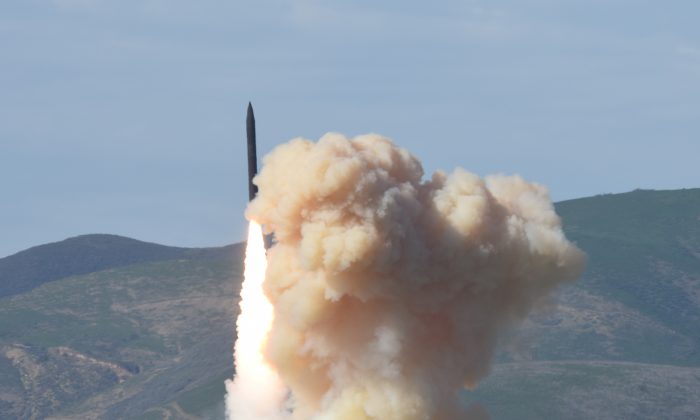 Arms Racing With China: Battle for the Missile Race Narrative

Not only is the United States now racing with China to build an adequate missile deterrent capability in Asia, it is also racing with Beijing over who will provide leadership and control the narrative regarding Asia’s strategic future.

After years of Russian cheating, and 30 years of watching China build up its theater missile forces, Washington on Aug. 2 departed from the 1987 Intermediate Nuclear Forces (INF) Treaty with Russia that prevented both from deploying 500km to 5,500km range ground-based missiles. The next day in Australia, Secretary of Defense Mark Esper stated he would like the United States to deploy intermediate range missiles to Asia within “months” though new land-based missiles would take longer to deploy.

Today the United States has no theater-range ground-based missiles in Asia, while China has about 1,800 medium and intermediate-range ballistic and cruise missiles. But this did not stop Beijing from spending the last week trying to cast Washington as the aggressor, issuing threats to countries that might cooperate with the United States, and calling “unfair” any suggestion that China should join arms control agreements.

That was the gist of an Aug. 6 press briefing by Fu Cong, Director General of the Bureau of Arms Control and Disarmament of the Chinese Ministry of Foreign Affairs.

Fu stated, “China will not stand idly by and will be forced to take counter measures if the U.S. deploys intermediate-range ground-based missiles in this part of the world.”  Fu claimed there was a “huge gap” between the nuclear arsenals of China and the United States and Russia, then saying, “I do not think it is reasonable or even fair to expect China to participate in any nuclear reduction negotiations at this stage.”

Fu also defended China’s right to deploy missiles to “Chinese territory,” the disputed islands in the South China Sea that China has turned into military bases. Putting intermediate range ballistic missiles (IRBMs) on its base on Mischief Reef allows them to attack Australia.

As Washington develops and deploys new intermediate range missiles, it must also work fast to gain control of the missile and arms control narrative in Asia. Here are three themes Washington should stress:

First, for thirty years China has been the main participant in Asia’s missile race. In 1991 the People’s Liberation Army (PLA) deployed its first 1,700km range DF-21 medium range ballistic missile (MRBM). By about 2010, the DF-21 evolved into the very accurate radar-guided warhead DF-21C, and the anti-ship ballistic missile DF-21D.

But that’s not all; in 2009 the Xian Aircraft Corporation H-6K bomber entered PLA Air Force service, a vastly upgrade version of the 1950s Soviet Tupolev Tu-16 medium bomber, with modern radar and electronics and the pylons to carry six 2,000km range CJ-20 land-attack cruise missiles. Another version of the H-6 may soon be armed with an air-launched MRBM, as the PLA is about to deploy Asia’s first hypersonic glide vehicle (HGV) armed missile, the DF-17.

Second, Washington should state that China refuses to allow any country to defend themselves from China’s missiles. In 2016, after much effort, the Obama Administration convinced South Korea to accept deployment of the Terminal High Altitude Area Defense (THAAD) anti-missile system to defend against long-range North Korean missiles. China responded with a furious campaign of bullying and harassment, that by November 2017, succeeded in forcing Seoul to limit THAAD to one unit.

China is ready to repeat this tactic. On Aug. 9, retired PLA General Wang Hongguang, former Deputy Commander of the Nanjing Military Region and who frequently issues military threats in the Chinese media, writing for the Tencent webpage, called for reconsidering “economic trade and various relations” with countries that allow deployment of U.S. missiles.

A third theme for Washington to advance is that China’s longstanding refusal to join arms control negotiations means that China values its ability to attack democracies over any desire for stability. China’s claims that the United States and Russia have more nuclear weapons for intercontinental missiles does not excuse China from seeking negotiated stability in regional missiles and nuclear weapons.

Washington should stress that in China’s view, arms control is “unfair” only because it threatens the Chinese Communist Party’s (CCP’s) goals to conquer democratic Taiwan and achieve hegemony in Asia. Chinese regional nuclear and missile superiority challenges the credibility of the U.S. military deterrent, weakens U.S. alliances, and advances China’s goals.

Washington should devise a strategy that combines building up U.S. missile forces on U.S. territories like Guam, asking for deployment with allies, while offering allies and partners new long-range missiles and/or their technology. This, in turn, should be combined with a multilateral dialogue with allies and partners that results in a common agenda for deterring Chinese aggression and convincing China to finally join nuclear and missile weapon reduction negotiations.

For both sides the stakes are enormous. For the United States its allies, and partners, success will mean that it can reliably deter war with China, allowing perhaps multiple future generations to continue to enjoy relative peace.

For the CCP, denial of its ambitions for conquest and hegemony means that it will have to learn how to exist peacefully with the democracies, increasing the chances of the Party devising reforms to avoid eventual violent revolution, previews of which are today on display in Hong Kong.