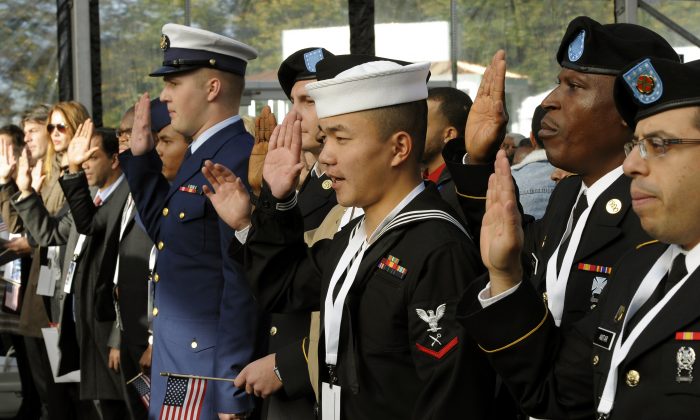 Soldiers from the different branches of military are sworn in during a naturalization ceremony at a ceremony on Liberty Island on Oct. 28, 2011. (Timothy A. Clary/AFP/Getty Images)
Opinion

As modern war relies on technology more than manpower, citizens in democracies should be vigilant

U.S. defense secretary nominee Ashton Carter’s background in physics and technology is a reflection of the technological demands of modern warfare. Less well understood is that the nomination also signals the continuing erosion of manpower’s part in America’s armed forces.

In centuries past, the temporary erosion of civil rights during wartime—including free speech and freedom from detention without trial—was often counterbalanced by extensions of the franchise to fighting men, and sometimes also to the women who supported them. The need for soldiers to fight wars gave democracies a kind of built-in correction from the grass roots.

From the American Revolution, when fighting-aged men gained the right to vote, through the Vietnam War when the suffrage expanded to 18-year-olds, contribution to collective defense has shored up political rights. Contrast this with the small number of specialized warriors, volunteers all, who are needed to fight the counterinsurgency wars of today.

This is not to say that the United States should bring back the draft. In the 20th-century wars of full mobilization, the United States needed manpower to match large opposing armies. The post–Cold War world poses different challenges: A world pockmarked with insurgencies is better handled with smaller, more professionalized, more flexible forces.

Far from the days of high school dropouts going to World War I and being drafted to serve in Vietnam, U.S. military recruit ads play up the modern fighting machine. Uncle Sam now seeks the tech-savvy drone pilot with video-game skills.

No one wishes a return to wars of existential threat that require mass conscription and widespread death, yet it should be recognized that technological and geopolitical changes have removed a democratic check on government.

If the modern democratic republic is a creature of wars that required manpower, popular support, and money for success, it is time to take stock. The thought that democracy has been shaped by war may be as shocking as the realization that humans evolved through a brutal process of survival of the fittest. It should occasion the same soul-searching about which attributes of the U.S. government are in need of curbing and which of augmentation. The knowledge of war’s role in buttressing democracy can at least help us better understand some of democracy’s exposed flanks.

Modern democracies emerged in an environment shaped by terrain, technology, and resources. With some notable exceptions in the most mountainous reaches of Afghanistan, new military and civil technologies have figuratively if not literally flattened terrain. Nevertheless, vulnerable locations like France that were prone to being governed as monarchies have remained democratic since the full-mobilization wars of the 19th and 20th centuries.

Today, no one would say that Bern is less democratic than the villages around the St. Gotthard Pass, or that the voters of Berlin have less clout than those in the Black Forest. Informed, educated and secure citizens with the right to vote can hold their representatives accountable as well as mountain men willing to charge with a bayonet-fitted gun.

It bears watching how democracy will adapt to today’s modes of warfare that economize on manpower. If the role of the masses in protecting the nation state diminishes, will the cross-class coalition between political inclusiveness and property hold?

One source of optimism is research showing that if per capita incomes are sufficiently high democracies remain resilient. Democracy may be a luxury good that all humans seek upon securing physical safety and economic livelihood. Perhaps prosperity alone can propel human societies toward self-governance without the blood costs of warfare to mend the divisions between them. That is the good scenario. There are bad scenarios too: Societies that fail to address growing class or ethnic or religious divisions may collapse into civil wars.

Vast parts of the world became prey in the 16th and 17th centuries to European states forged in war. In the 19th and 20th centuries, the anti-colonial elites that led independence movements generally could not mobilize their full populations against their overlords. Part of the reason for this is that they had no experience in building large armies to fight.

The Latin American aristocracy negotiated independence with weary, halfhearted imperial overlords without having to raise the rabble and share the goods. The Boers who fought Britain in 1899 for control of South Africa would have rather knuckled under continued British rule than to resort to a coalition with the blacks whom they oppressed. Constructing a democratic state from long-standing class and ethnic divisions confronts deeper challenges than transforming a monarchical nation-state into a democracy.

Samuel Huntington argued in his 1968 classic, “Political Order in Changing Societies,” “The most important political distinction among countries concerns not their form of government but their degree of government.” That policy advice, taken seriously by successive U.S. administrations, has produced Frankenstein’s monsters the world over—militarized aristocracies or dictatorships that have little reason to share power with their populations.

We do not agree that states must undergo an authoritarian stage before becoming stable democracies, as Huntington and others argued. Electoral democracies work best sitting atop fluid splits among the elite rather than in the presence of deep divides between classes, ethnicities, or religions on which politicians have an incentive to capitalize. Militarizing authoritarianism draws the wrong lesson from history.

America in 2014 is in no imminent danger of slipping into authoritarian rule. Nor are Ashton Carter’s scientific credentials a sign that the United States is becoming a technocratic state beyond the reach of political accountability in matters of war and peace. But it is time for U.S. citizens to recognize that, manned by volunteers and mercenaries, powered by high-tech machinery, and financed substantially by foreign-floated government debt, America’s war machine is increasingly off the public’s radar.

Only if Americans acknowledge the historical reality that they owe their voice in politics—both their motivation to participate and the seriousness with which they are heard—to a military priority on the common defense, will they undertake the vigilance required to keep U.S. democracy healthy.

John Ferejohn is the Samuel Tilden professor of law at New York University. He is the author of “Pork Barrel Politics” (1974) and a co-author of “A Republic of Statutes” (with William Eskridge, 2010). Frances Rosenbluth is the Damon Wells professor of political science at Yale University. She is author of “Financial Politics in Contemporary Japan” (1989) and co-author of “Women, Work, and Power” (with Torben Iversen, 2010. © 2014 The Whitney and Betty MacMillan Center for International and Area Studies at Yale.