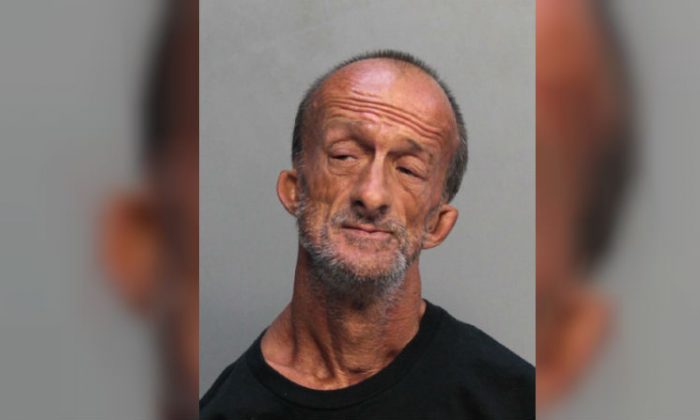 A 46-year-old man with no arms has been charged with stabbing a tourist in Miami, Florida, according to police.

Jonathan Crenshaw is a homeless street artist who is known for painting with his feet in the South Beach area, reported Miami Herald.

Police allege, just after midnight on July 10, Crenshaw stabbed a Chicago tourist using a pair of scissors that he held with his feet. Crenshaw told police that he was lying down when the tourist, 22-year-old Cesar Coronado, approached him and assaulted him in the head. The 46-year-old man then allegedly stabbed Coronado in the arm twice and quickly fled the scene.

Miami Beach Police Department officers found Coronado lying on the ground and bleeding from his left arm. He was taken to Mount Sinai Medical Center for treatment.

Coronado was visiting Miami with his friend Cindy Barrientos, 22, when he saw Crenshaw. He told police he was attacked when he and his friend approached Crenshaw to ask for directions. Barrientos described the attacker as a homeless man with no arms, according to the news website.

Police found Crenshaw in a nearby area and charged him with aggravated battery, according to jail records. At the time of his arrest, Crenshaw told police he was only defending himself.

Crenshaw is currently held at Turner Guilford Knight Correctional Center on a $7,500 bond.

According to the news website, the Crenshaw has a criminal history dating to 2008. He was previously arrested for trespassing, disorderly intoxication, vandalism, and battery on police officers, firefighters and city code inspectors.

According to the Miami New Times, Crenshaw told the publication in 2011 that he was born in Alabama but moved to different cities throughout his childhood.