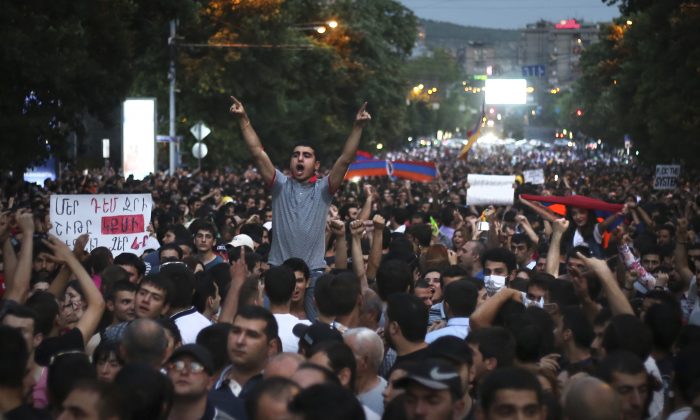 YEREVAN, Armenia—Thousands of demonstrators protesting a hike in electricity prices entered a third straight day of standoffs with police in Armenia’s capital Wednesday, June 24, with no visible progress toward resolving the worst unrest the country has seen in years.

President Serge Sarkisian has offered to meet with representatives of the protesters in the impoverished former Soviet nation, but they have refused, demanding instead that he announce on television that the price hikes will be scrapped.

The unrest is raising concerns about political stability in Armenia, which has relied on close ties with Russia and joined a Moscow-dominated economic alliance.

Sarkisian, who hasn’t yet commented publicly on the protests, headed to Brussels late Wednesday to attend a conference.

The unrest is raising concerns about political stability in Armenia, which has relied on close ties with Russia and joined a Moscow-dominated economic alliance.

Russia has a military base in Armenia, and Russian companies control some of the most prized economic assets, including the power grid. The protest was triggered when an Armenian government panel agreed to raise electricity rates sharply at the request of the power company.

Some politicians in Russia have suggested that the West or Western non-governmental organizations had a hand in fomenting the unrest, comparing the protests to those in Ukraine in 2013 that led to the overthrow of the Russia-friendly president.

The Kremlin, however, took a conciliatory tone, voicing hope that the standoff will be settled peacefully.

The demonstrators in Yerevan have denied any links either to foreign organizations or to opposition parties in Armenia. The protesters, most of whom are young, have used social media to organize their actions, which began Friday, June 19, with three days of sit-in protests.

“No one is controlling us from either West or East,” said Yeghia Nersesian, a 36-year-old photographer and activist who is one of the organizers of the protest. “We will look after ourselves. Our reputation is what matters.”

Seeking to win broader public support for their action, activists handed out leaflets urging people to “join the struggle from home” by making noise with their utensils from their balconies.

They also called on Yerevan residents to switch off the lights in their apartments for an hour as a sign of protest.

On Monday, about 5,000 demonstrators marched toward the presidential residence but were blocked by police, who early Tuesday, June 23, used water cannons to forcefully disperse the peaceful demonstration. Nearly 240 protesters were detained, and 15 people were injured.

The demonstration resumed with new force Tuesday, evening when thousands launched a new attempt to march on Sarkisian’s residence. They were again stopped by police, who this time refrained from any use of force.

Police have released all those detained and dropped charges against them.

Hundreds of protesters remained sitting on the road Wednesday, ignoring police appeals to disperse. Many others sought shelter from the sun under trees and umbrellas as the temperature soared to about 40 C (104 F).

Some restaurants, bars, and stores provided protesters with free food and drinks.

The two sides also were separated by a barricade of large trash containers that the protesters had placed across the road.

When the evening came, and the sizzling heat abated a bit, the number of protesters grew to 10,000. People from the suburbs and nearby cities joined the crowds.

The atmosphere was relaxed and even festive with people shouting chants, singing national songs, and dancing.