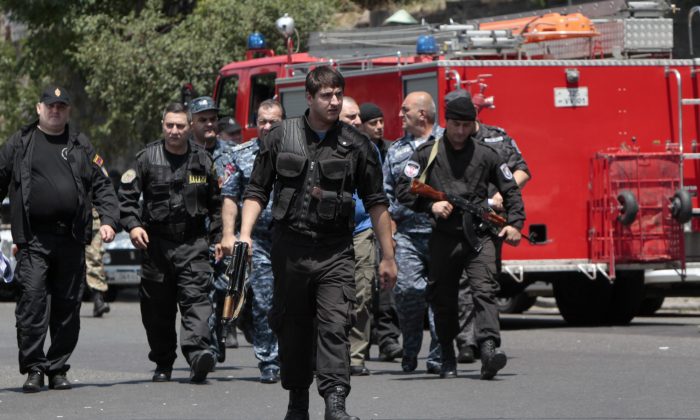 The attackers demanded the release of Jirair Sefilian, who was arrested last month, and the opposition group repeated its call for the government to resign.

Police cordoned off the area around the station in Yerevan’s Erebuni district, bringing in armored vehicles and construction equipment to block the road, and said negotiations were being conducted with the assailants for them to give themselves up and release the hostages.

“If they don’t listen to our appeal, we will neutralize them, because killers cannot be dealt with in any other way,” said Armenia’s deputy police chief, Unan Pogosian. “But for now we are continuing the negotiations.”

Their only demand was the release of Sefilian, according to the deputy police chief, who said this was out of the question.

An opposition member of parliament, Nikol Pashinian, who went to the station to meet with the attackers, urged both sides to exercise restraint. He said the attackers had combat experience from the war with neighboring Azerbaijan in the 1990s and “don’t plan to retreat” if the police station is stormed.

Political analysts differed on the seriousness of the threat posed to the national security of Armenia, a former Soviet republic in the South Caucasus. Alexander Iskandaryan said it was potentially very dangerous.

“This is a completely new situation, with the appearance of armed people who are ready to decide political questions,” he said.

Alexander Markarov, however, said he doubted the attack on the police station would become a serious threat because the assailants lacked both resources and public support.

Sefilian, a leader of the opposition group Founding Parliament, was arrested June 20 and charged with illegal acquisition and possession of weapons. Investigators said he and his supporters were planning to seize government buildings and the television transmission tower.

Varuzhan Avetisian, a spokesman for the group, said the attack on the police station was to demand the release of all “political prisoners” and he called on Armenians to take to the streets to force the government to step down.