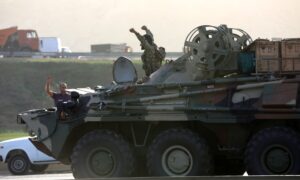 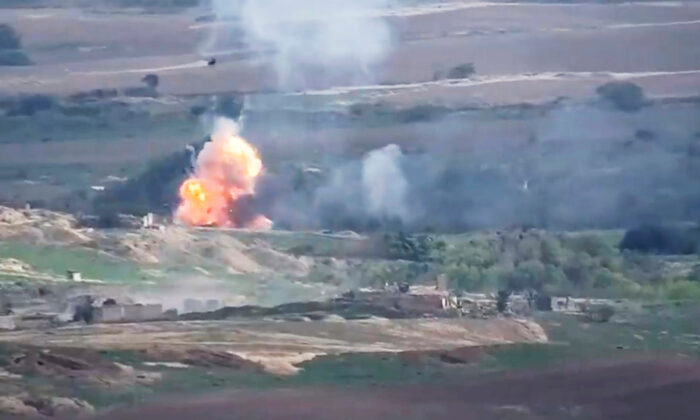 This image taken from a video released by Armenian Defense Ministry on Sept. 28, 2020 allegedly shows fighting between Armenian and Azerbaijani forces at the contact line of the self-proclaimed Republic of Nagorno-Karabakh, Azerbaijan. Armenian and Azerbaijani forces fought over the separatist region of Nagorno-Karabakh for a second day Monday, with both sides blaming each other for resuming the attacks that reportedly killed and wounded dozens as the decades-old conflict has reignited.(Armenian Defense Ministry via AP)
Europe

YEREVAN, Armenia—Armenia said one of its warplanes was shot down on Tuesday by a fighter jet from Azerbaijan’s ally Turkey, killing the pilot, in fighting over the separatist territory of Nagorno-Karabakh. Both Turkey and Azerbaijan denied it.

The move would represent a major escalation in the decades-old conflict between Armenia and Azerbaijan over the region that was reignited on Sunday. It followed numerous calls from around the globe for a cease-fire.

Armenian officials said an SU-25 from its air force was shot down in Armenian airspace by a Turkish F-16 fighter jet that took off from Azerbaijan, and the pilot was killed.

The allegation of downing the jet was “absolutely untrue,” said Fahrettin Altun, communications director for Turkey’s president. Azerbaijani officials called it “another fantasy of the Armenian military propaganda machine.”

Earlier in the day, Azerbaijan’s Defense Ministry said Armenian forces shelled the Dashkesan region in Azerbaijan. Armenian officials said Azerbaijani forces opened fire on a military unit in the Armenian town of Vardenis, setting a bus on fire and killing one civilian.

Armenia’s Foreign Ministry denied shelling the region and said the reports were laying the groundwork for Azerbaijan “expanding the geography of hostilities, including the aggression against the Republic of Armenia.”

Dozens of people have been killed and wounded since fighting broke out on Sunday. The Nagorno-Karabakh Defense Ministry reported 84 servicemen killed, while Azerbaijan President Ilham Aliyev said 10 civilians were killed on its side, although he didn’t detail the country’s military casualties.

Nagorno-Karabakh lies within Azerbaijan but has been under the control of ethnic Armenian forces backed by the Armenian government since 1994 at the end of a separatist war following the breakup of the Soviet Union three years earlier.

The region in the Caucasus Mountains of about 4,400 square kilometers (1,700 square miles), or about the size of the U.S. state of Delaware, is 50 kilometers (30 miles) from the Armenian border. Soldiers backed by Armenia also occupy some Azerbaijani territory outside the region.

German Chancellor Angela Merkel has pushed for “an immediate cease-fire and a return to the negotiating table” in phone calls with the leaders of both countries, her office said.

She told them the Organization for Security and Cooperation in Europe offers an appropriate forum for talks and that the two countries’ neighbors “should contribute to the peaceful solution,” said her spokesman, Steffen Seibert.

U.S. Secretary of State Mike Pompeo said during a visit to Greece that “both sides must stop the violence” and work “to return to substantive negotiations as quickly as possible.”

Turkey supports Azerbaijan in the conflict, with President Recep Tayyip Erdogan urging Armenia to withdraw immediately from the separatist region.

Turkish Foreign Minister Mevlut Cavusoglu said Turkey is “by Azerbaijan’s side on the field and at the (negotiating) table.”

Cavusoglu said the international community must defend Azerbaijan’s territorial integrity in the same way it defended the integrity of Ukraine and Georgia.

“They are holding Azerbaijan, whose territories have been occupied, on an equal footing with Armenia. This is a wrong and unjust approach,” Cavusoglu said after a visit to Azerbaijan’s Embassy in Ankara.

Russia, which along with France and the United States co-chairs the Minsk group set up in 1992 to resolve the Nagorno-Karabakh conflict, urged every country to help facilitate a peaceful resolution of the conflict.

“We call on all countries, especially our partners such as Turkey, to do everything to convince the opposing parties to cease fire and return to peacefully resolving the conflict by politico-diplomatic means,” Kremlin spokesman Dmitry Peskov said Tuesday.