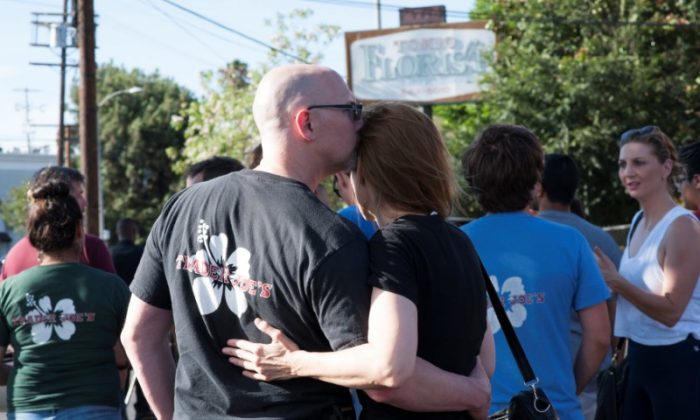 A Trader Joe's employee embraces a woman in a parking lot near a Trader Joe's store where a hostage situation unfolded in Los Angeles, California, July 21, 2018. REUTERS/Andrew Cullen
Crime and Incidents

Armed Suspect in Custody, One Woman Killed After Standoff at Trader Joe’s in LA

A police standoff ended after an armed suspect who barricaded himself inside a Trader Joe’s store in Los Angeles, California, has been taken into custody, police said. One woman was killed inside the store.

The suspect led police on a pursuit before he crashed his car next to the grocery store in the Silver Lake neighborhood and opened fire at officers on July 21. He then barricaded himself inside the store while shoppers ran for cover, Los Angeles police said in a Twitter statement. He was wanted by police in connection with an earlier separate shooting.

UPDATE: Earlier today, officers went in pursuit of a suspect wanted in connection to a shooting. At the termination of the pursuit, an officer involved shooting occurred, and the suspect has barricaded himself inside a #TraderJoes in #Silverlake. https://t.co/fLAowNpgYL

Los Angeles Mayor Eric Garcetti spoke at a press conference shortly after the hostage situation ended, reported NBC Los Angeles. He announced that a woman was killed inside the grocery store and was dragged out by an employee. No details were released about the victim, as police were locating the victim’s next of kin.

With @LAPDChiefMoore to share the latest on the resolution of the incident at the #SilverLake #TraderJoes where LAPD has taken the suspect into custody. Watch live https://t.co/0UmiKsKEc9

Earlier today, authorities declared an active tactical alert after the suspect barricaded himself inside the store. Reinforcements from the SWAT team also responded to the situation.

After a standoff that lasted for about three hours, police said they had “successfully taken the suspect into custody without incident.”

#UPDATE: We have successfully taken the suspect into custody without incident. The situation remains fluid as officers move forward clearing the location.

The incident started as a family dispute in South Los Angeles at around 1:30 p.m. where the suspect allegedly shot his grandmother and girlfriend before fleeing in his Toyota Camry, reported the Los Angeles Times. The suspect is believed to be a man in his late teens.

Police were able to locate the suspect’s car and a chase then ensued at which point the suspect fired multiple rounds at pursuing officers.

The pursuit ended after the suspect crashed into a light post outside the Trader Joe’s, according to the newspaper. He then opened fire at authorities before running into the grocery store. The female victim was struck by the gunfire and was pronounced dead at the scene.

The suspect then crashed his vehicle at which point an officer involved shooting occurred. At the termination of the pursuit, the suspect fled into the Trader Joe’s. Inside the Trader Joe’s, a female victim was struck by gunfire. She was pronounced dead at scene.

Police said the suspect held multiple people hostage inside the store. After police negotiations, the suspect surrendered and voluntarily walked out of the store. He then asked that he put handcuffs on himself, and was taken into custody.

He then proceeded to hold multiple victims hostage within the location. Through the hard work of multiple LAPD entities, the suspect walked out of the location, and asked that he put handcuffs on himself, and was taken into custody.

An active investigation is currently ongoing.

A family unification location had been set up for victims affected by the shooting at Los Angeles Police Department Northeast Station, 3353 N. San Fernando Road.