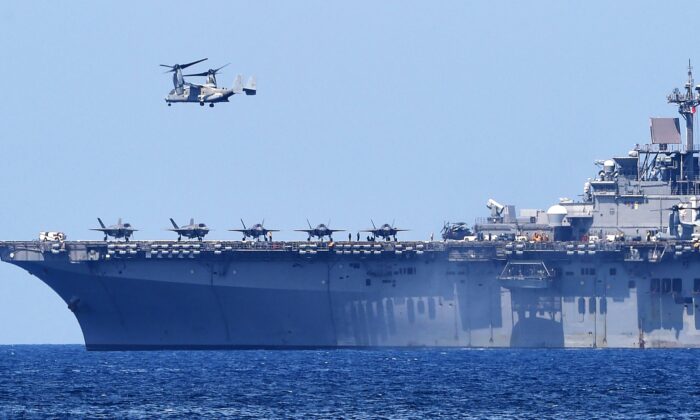 A V-22 Osprey takes off from the USS Wasp as part of the annual joint U.S.-Philippines military exercise on the shores of San Antonio, facing the South China Sea, in Zambales province, Philippines, on April 11, 2019. (Ted Aljibe/AFP via Getty Images)
Congress

Ranking Member Rep. Mike Rogers’s (R-Ala.) amendment, to increase the Biden administration’s NDAA budget request of $744 billion for the Pentagon and Energy Department defense programs by close to $25 billion, was adopted by the committee members with bipartisan support.

“My amendment includes member priorities from both Republicans and Democrats, and unfunded priorities from the combatant commands and services,” said Rogers in his opening statement on Wednesday, adding that the amendment will put money into emerging technologies to help the United States stay competitive, and it improves shipbuilding as well air and ground capabilities.

During the debate, Rogers said the increased spending would ensure the United States can compete with adversaries like China.

“It will ensure defense spending grows by 3 percent above inflation, meeting the recommendations of the bipartisan National Defense Strategy Commission. It reverses the cuts proposed by the president’s budget. …. It provides over $15 billion to fulfill unfunded procurement research and readiness priorities for the services, and it includes over 200 member priorities not fully addressed by the underlying bill,” Rogers said.

The chairman of the committee, Rep. Adam Smith (D-Wash.), voted against Roger’s amendment, citing waste and ill-targeted priorities. “I really believe that the single most important thing that the Defense Department needs to do right now is spend its money wisely, is do a better job of acquisition and procurement, do a better job of anticipating what the threats are now versus what they were 30 years ago,” said Smith.

Rep. Elaine Luria (D-Va.), who is a former Navy officer, said she fully supports Rogers’s defense funding increase because it will send a message of strength to adversaries and allies.

“Right now, there are malign actors who seek to attack us and do us harm, whether that’s through provocative and illegal maritime claims in the South China Sea, devastating cyberattacks, or confrontations with our allies such as Israel. With the president’s budget, I have been saying ever since it was released that it does not do enough. We needed 3 to 5 percent real growth, and I want to applaud Mr. Rogers and my other colleagues who support this legislation and finally doing what we need to do to deal with China,” said Luria.

“Our law says we need 355 ships. We need 11 aircraft carriers. That’s required by law. And when a budget comes over that proposes decommissioning more ships than we build, that doesn’t get us in the right direction to have the force that we need to deal with China. This amendment is incredibly important,” added Luria.

Because of the huge volume of amendments, debate on the NDAA will go late into the night. Republicans on the HASC have filed amendments that will force Democrats on the panel to vote on a variety of sensitive issues, from Afghanistan and China to banning the teaching of critical race theory (CRT).

Before the debate on Monday, the GOP said they would offer more than 50 amendments during the debate that seek to hold the Biden administration accountable for the chaotic and deadly withdrawal from Afghanistan.

“We want to find out what happened to the equipment that was left behind, what was left behind. We want to know why specifically Bagram was abandoned,” said Rogers at an Aug. 31 press conference on holding the Biden administration accountable for the Afghanistan withdrawal.

The ranking member was referring to the U.S. military equipment seized by the Taliban terrorist group and the decision to leave Bagram Air Base in July.

“The president and his State Department drove that decision, not the military,” Rogers said, countering President Joe Biden’s earlier statements on the decision.

“We created a $250 million counterterrorism fund. We want to know what the security impacts are for letting the ISIS-K terrorists out,” Rogers said of one of the amendments Republicans plan to offer, targeting the group responsible for attacking Kabul’s airport last week, leaving 13 U.S. troops and dozens of Afghan civilians dead.

Another issue being forced for a vote is the teaching of CRT, and Rep. Jim Banks’s (R-Ind.) amendment would ban the teaching of CRT or any related theories in the military. GOP Sen. Tom Cotton (R-Ark.) forced a similar vote on an amendment that would ban federal funds from backing teaching critical race theory in schools during the debate on the budget resolution.

In addition, Rogers said his party will have an amendment that would require the Biden administration to provide regular briefings on the terrorist groups that were formed because of the Afghanistan withdrawal.