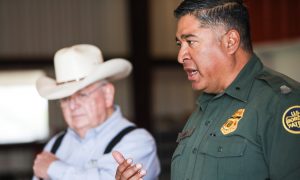 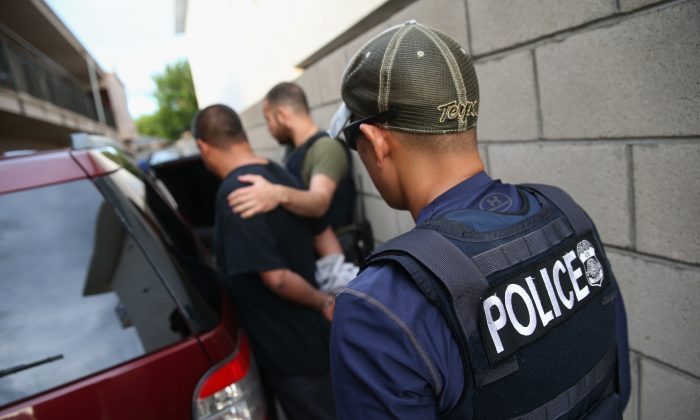 A man is detained by U.S. Immigration and Customs Enforcement (ICE), agents in Los Angeles, Calif. on Oct. 14, 2015 (John Moore/Getty Images)
US News

Armed Militia Is Holding Illegals From Mexico for Border Patrol

A militia group calling itself the United Constitutional Patriots is detaining illegals as they cross the New Mexico border.

The armed group stops the illegal migrants and holds them until U.S. Customs and Border Protection (CBP) guards can intervene. They reportedly “arrested” about 200 illegal aliens this week and documented their efforts on YouTube, according to The New York Times.

The militia and groups like it have previously indicated their intention of apprehending illegal migrants. The CBP has issued instructions in the past to residents to ensure the militias are not a recognized state or federal authority.

The southern border has been the scene of a massive influx of illegal border crossings in the past few months, with the CBP indicating that the situation has reached a “breaking point.” Texas has been particularly hard hit, and just this week, Nevada declared a state emergency.

New Mexico’s Otero County declared a state of emergency Wednesday and asked the governor to use the National Guard to re-open CBP checkpoints.

The checkpoints had been closed temporarily after agents were relocated to assist migrant processing to prevent drugs and illegal immigrants from crossing the border, but that apparently hasn’t stopped the influx of illegals who enter the state at non-designated crossings. the Alamogordo Daily News reported.

This week in Arizona, four illegals walked right past a group of visiting congressmen who were on scene to assess the extent of the border crisis.

The American Civil Liberties Union has condemned the militia’s actions in a letter Thursday to the governor of New Mexico, saying “racist and armed vigilantes” have no authority to “kidnap and detain” would-be refugees.

According to the Times, New Mexico Attorney General Hector Balderas has issued a statement warning, “These individuals should not attempt to exercise authority reserved for law enforcement.”

According to Fox News, Carlos A. Diaz, a spokesman for CBP, reiterated Balderas’s concerns and said Border Patrol “does not endorse private groups or organizations taking enforcement matters into their own hands.”