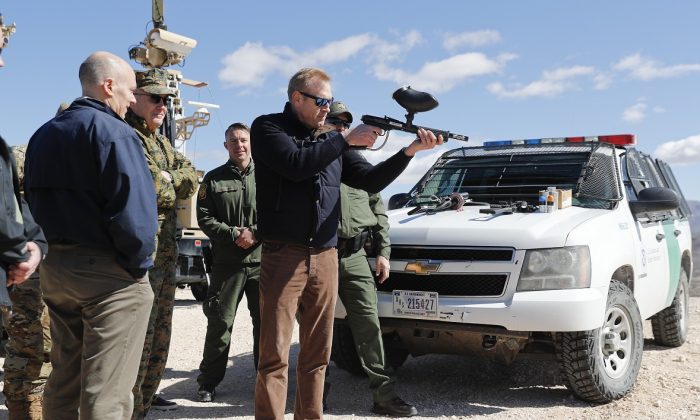 Two US soldiers were questioned by Mexican troops earlier this month while conducting a surveillance operation on the US side of the southern border, two US defense officials tell CNN, on April 19, 2019.(Pablo Martinez Monsivais/AP)
US News

Armed Mexican Troops Question American Soldiers on US Side of Border

Two U.S. soldiers were questioned by Mexican troops earlier this month while conducting a surveillance operation on the U.S . side of the southern border, two U.S. defense officials told CNN.

“On April 13, 2019, at approximately 2 p.m. CDT, five to six Mexican military personnel questioned two U.S. Army soldiers who were conducting border support operations in an unmarked (Customs and Border Protection) vehicle near the southwest border in the vicinity of Clint, Texas,” U.S. Northern Command told CNN in a statement.

“The U.S. soldiers were appropriately in U.S. territory” during the encounter, the statement added.

During the incident, the Mexican soldiers pointed their weapons at the U.S. troops, removing a soldier’s sidearm and returning it to the unmarked U.S. vehicle, the officials said.

The Mexican troops were armed with what appeared to be assault rifles, according to one official.

Officials said that the U.S. soldiers allowed the weapon to be taken “in an attempt to de-escalate a potential volatile situation.”

“Throughout the incident, the U.S. soldiers followed all established procedures and protocols,” Northern Command said.

Armed Mexican troops question American soldiers on the US side of the border https://t.co/xxfPd7BGFb pic.twitter.com/Tj1kRk07ct

The encounter took place south of the border fence in the area but north of the Rio Grande, the officials said.

However, the officials said the river in that area consists of brush-filled and dried-out riverbed, making it “very easy” for people to be confused as to what side of the border they are on.

One of the American soldiers spoke some Spanish and was able to explain the situation to the Mexican forces. The two sides talked the incident over and promised to de-conflict in the future, the officials said.

“Though they were south of the border fence, U.S. soldiers remained in U.S. territory, north of the actual border,” the statement said, adding that “after a brief discussion between the soldiers from the two nations, the Mexican military members departed the area.”

President Donald Trump had previously ordered the active duty military to support border security and the U.S. has some 3,000 active duty troops supporting the Department of Homeland Security on the southern border with Mexico in addition to some 2,000 National Guard troops.

The Pentagon expects additional troops to be sent to the border to support additional pending requests for assistance from DHS.

On Friday, acting Secretary of Defense Pat Shanahan told reporters at the Pentagon that he did not “have a finite number” in terms of how many additional troops would be sent but said the Pentagon was “looking at anticipating” what DHS needs prior to the receipt of a formal request for assistance.

Acting Defense Secretary Shanahan also said he does not have a finite number of troops that would be sent once the Department of Defense receives a request for assistance. https://t.co/LOxKyvXBRH

“Where DHS loses its capacity is in the migrant family processing, when you think about their finite ability to do apprehensions they’re really kind of trapped back in the processing side of things so working with the joint staff, we’re finding a way to how do we do more monitoring and detection for them, do we maybe take that on as a mission,” Shanahan said.