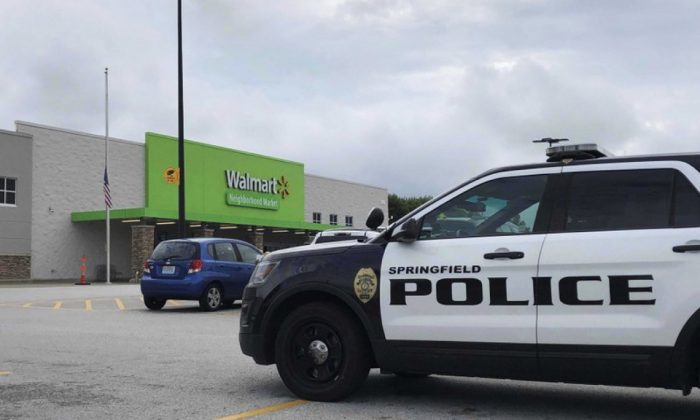 Police in Springfield, Missouri, said they arrested a man who showed up Thursday at a Walmart store carrying a rifle and wearing body armor, terrifying shoppers who fled from the store.

Springfield police posted on Facebook that “an armed individual” was arrested. No shots were fired.

The Springfield News-Leader quoted Lt. Mike Lucas as saying that the man arrived Thursday afternoon wearing body armor and military-style clothing. He walked inside the Walmart carrying a “tactical rifle” and another gun. Lucas said the man had more than 100 rounds of ammunition.

Lucas said an off-duty firefighter held the suspect — a 20-year-old man who was not immediately identified — at gunpoint until police arrived about three minutes after receiving an initial call.

“Thankfully, there weren’t any shots fired. I think it’s great that that off-duty fire man was here,” Lucas said.

Lucas said the suspect would be charged but the exact crimes would be determined later. Security video from inside the store would be reviewed to determine the man’s demeanor and a possible motive, he said.

“His intent obviously was to cause chaos here, and he did that,” Lucas added.

Springfield is about 165 miles south of Kansas City, Missouri.

In related news, a 31-year-old man said he was “intrigued” by the mass murders in Ohio and Texas when deputies arrested him for calling in a fake threat to open fire inside a Florida Walmart, forcing 1,000 people to be evacuated.

Wayne Lee Padgett, 31, was tracked down and arrested on Aug. 4, “just hours” after phoning in a fake threat to the Walmart in Gibsonton, just 10 miles south of Tampa, according to the sheriff’s office.

Padgett is charged with a false report of using a firearm in a violent manner, a second-degree felony under Florida state law, according to a statement from the Hillsborough County Sheriff’s Office.

Hillsborough County Sheriff Chad Chronister told a press conference that Padgett admitted to making the call, telling officers “he was intrigued with the shootings over the last couple of days.”

Twenty-nine people were killed in two mass shootings that could have been much worse if not for the swift intervention of armed officers.

One of those shootings in El Paso, Texas, took place at a shopping center, with most of the 20 who were killed inside a Walmart at the time.

Padgett is unemployed and has no criminal history. Law enforcement found no firearms located at his home.

“After the events over the last week, we all fear for our safety to begin with so to have an individual who for whatever reason wants to be a copycat, or wants to instill fear in people for whatever that motive may be is disturbing,” Chronister told reporters, according to WFLA. “If you make any type of threat, know that your sheriff’s office is going to take it extremely seriously, expend whatever resources in a timely fashion to find that threat.”

ARRESTED:Just hours after a false threat was made at the Walmart in Gibsonton, we’ve arrested Wayne Lee Padgett, 31….

Padgett’s mother works at the Walmart, and was at work during the time of the call, according to deputies.

Managers at the Walmart received a call just after 1 p.m. on Aug. 4, reported the Tampa Bay Times, from a man threatening to enter the store and shoot everyone.

Staff at the mall initiated an evacuation of nearly 1,000 customers inside the store.

Deputies were on the scene within five minutes, checked for injured customers, then headed into the store to check for hidden people or weapons. They determined that the threat was not credible within an hour.

The sheriff praised his deputies for their response to the threat.

“They arrived within moments and immediately gained control of the chaotic scene, evacuating large numbers of patrons while simultaneously and without hesitation, searching for the shooter,” he wrote on Twitter.

He is being held in Hillsborough County Jail on a $7,500 bond, according to jail records.