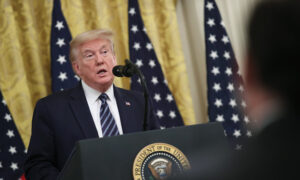 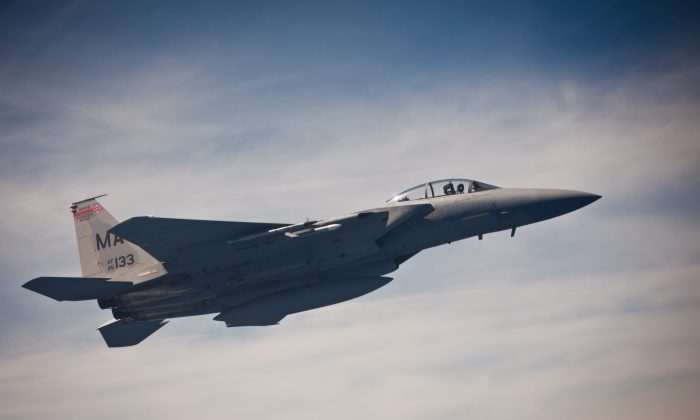 An F-15 fighter jet flies over the Atlantic ocean as it prepares a mid-air refueling process on May 27, 2012. (Benjamin Chasteen/The Epoch Times)
Trump Administration

An armed Air Force F-15 fighter jet protecting President Donald Trump while he was spending the weekend at Camp David, Maryland, was forced to make an an unplanned landing on May 2 at Joint Base Andrews after a sudden in-flight emergency, officials said.

At the time of the diversion, which was around 1:30 p.m., the F-15C Eagle from the Oregon Air National Guard’s 142nd Fighter Wing, was conducting a mission as part of “Operation Noble Eagle” for the North American Aerospace Defense Command, an Air Force spokesman said in a statement, reported Fox News.

The aircraft skidded off the runway after landing at Joint Base Andrews, The Drive reported. Images of the fighter jet published on social media showed a drop tank located under its right wing had been crushed, while its landing gear collapsed, according to the outlet.

“The aircraft’s landing gear malfunctioned and the aircraft came to rest on its fuselage,” the statement read. “There were no injuries to the pilot and runway operations have been unaffected.”

The fighter jet was armed at the time of the incident, two defense officials told Military.com, noting that “these types of missions are armed.”

Officials said an investigation would be conducted into the incident.

At the time, Trump was spending a weekend at the presidential retreat, marking the first time he had left the White House grounds since March 28, due to the CCP (Chinese Communist Party) virus pandemic, commonly known as the novel coronavirus pandemic.

The president last visited Norfolk, Virginia, to see the U.S. Navy hospital ship Comfort set sail for New York harbor. Trump has a trip to West Point planned for June 13, when he is set to address U.S. Military Academy graduates.

Before he left the White House, Trump told reporters that he would be practicing social distancing while at Camp David, and that he had planned a working weekend that would include phone calls with foreign leaders.

On Tuesday, Trump is scheduled to visit Phoenix, Arizona—a trip which comes as the White House moves to push state leaders to consider reopening their economies.

Trump said his Arizona trip would be industry-focused because “it’s too soon for the big everybody-get-together-and-stand-next-to-each-other crowds.”

White House spokesman Judd Deere said on Twitter last week that the president plans to tour a Honeywell plant “to highlight critical medical equipment production and the addition of 500 manufacturing jobs in the state.”