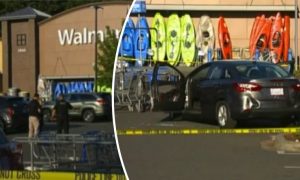 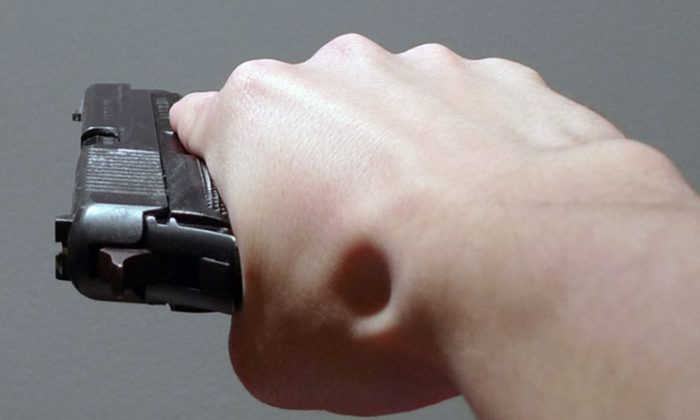 Sometimes having a few armed citizens on hand can be a disadvantage—to criminals, as was the case when two men decided to steal some tools. (Sandstein/https://commons.wikimedia.org/w/index.php?curid=8755590/CC BY 3.0)
Crime and Incidents

A pair of young hoodlums decided to steal some tools from a local hardware store but they didn’t consider that the customers there might have some hardware of their own.

Two suspects, aged 22 and 23, entered the Coastal Farm & Ranch store in Marysville, Washington, just before 3 p.m. on Dec. 22, according to the Marysville Police Department.

The pair grabbed four nail guns, each worth about $400, and headed out to the parking lot where their Honda Civic was waiting.

But things didn’t go quite as smoothly as the pair had planned.

Images from the parking lot. pic.twitter.com/uAFaBV32K1

According to Herald.net, half a dozen armed customers surrounded the two miscreants.

One customer stood directly in front of the suspects’ car, blocking its getaway. He ordered the alleged thieves to get out of the car.

According to the Herald, one suspect told the other, “He won’t shoot, run him over.”

The driver hit the gas and the car hit the customer, who fell onto the hood and slid off.

Immediately, at least three of the customers opened fire on the fleeing car. One aimed at the driver’s side front tire, and another at one of the rear tires.

Two of the tires were punctured but the thieves continued their escape.

A store employee leapt into his car and gave chase. When the two suspects saw him, the passenger stuck what the employee assumed as a gun out the window.

Seeing the risk, the employee gave up the chase.

Even so, the two suspects didn’t get far. Marysville police found the suspects’ car abandoned about three blocks from the store, with two flat tires, and the stolen tools still inside.

We believe that at least two civilians fired at the shoplifters or the shoplifter's car as it was fleeing the store. Those citizens then left before police arrived. We are asking that those who fired contact MSVL police to provide us a statement as to what they saw.

After a search of the area, assisted by a K-9 unit, the two suspects were located and apprehended.

The pair denied having a gun, claiming that they never saw anyone pursuing, and denied hitting anyone with their car. However, the store security video captured the collision clearly.

One of the suspects was from Mukilteo; the other hailed from Everett. Both ended up in the Snohomish County Jail as the prime suspects in a first-degree felony theft.

According to Marysville police Commander Mark Thomas, the people who shot at the fleeing suspects might or might not have been breaking the law themselves. None of them stuck around to be interviewed by the police.

“Anytime you’re firing a weapon in a public place, especially a few days before Christmas in a crowded parking lot, it is a grave concern,” Thomas told the Herald.

While the potential for by stander injury was high, nobody ended up getting shot.

The Marysville Police are hoping the people who fired at the fleeing car, as well as any other witnesses, will come forward to assist in the investigation.

Marysville residents responded to the news in various ways.

Eric Keenen shared his thoughts on the Marysville Police Twitter feed: “Citizens are getting frustrated by the brazen shoplifters.

“I have seen more shoplifters in the past year than my entire 50 year life. Clerks are told to “let them go” but lawful citizens pay for this!

Another Twitter user Melinda Schoening said she saw a link between substance abuse and rising crime.

“It is beyond frustrating to watch our cities go down hill because of people who are not seeking help for their addiction and instead want to trash the streets and steal,” she posted. “I have lived in Marysville for 12 years and it breaks my heart to see it turn into this.”