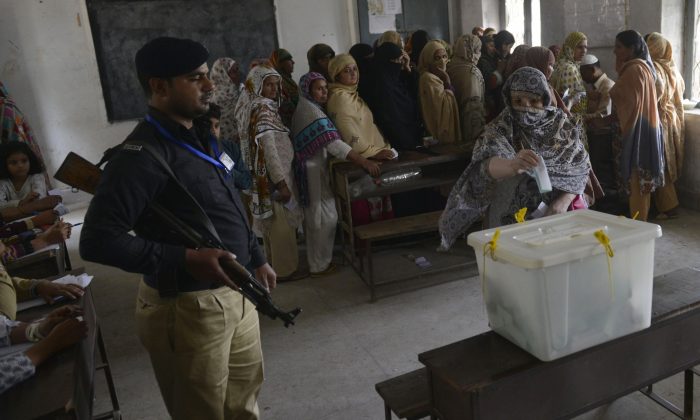 A Pakistan policeman watches as a voter casts a ballot during a local government election at a polling station in Lahore on Oct. 31, 2015. An armed clash between workers of two political parties killed at least 11 people during the first phase of local government elections in southern Pakistan on October 31, officials said. The incident happened in Khairpur district, some 449 kilometres northwest of the port city of Karachi, the capital of the southern Sindh province. (Arif Ali/AFP/Getty Images)
Middle East

Pir Mohammad Shah says the clashes broke out in the suburbs of Khairpur town on Saturday during the first phase of voting for local government positions.

Shah says 25 people from both sides were injured in the clash. He says army troops have been called in to control the situation.

Saturday was the first phase of a three-phase election in southern Pakistan’s Sindh province and Punjab province in the country’s east. Remaining phases will be held later this month and next month.

Clashes between political opponents are not uncommon in Pakistan.