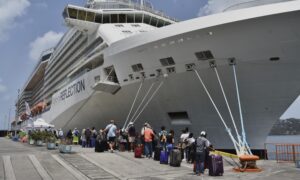 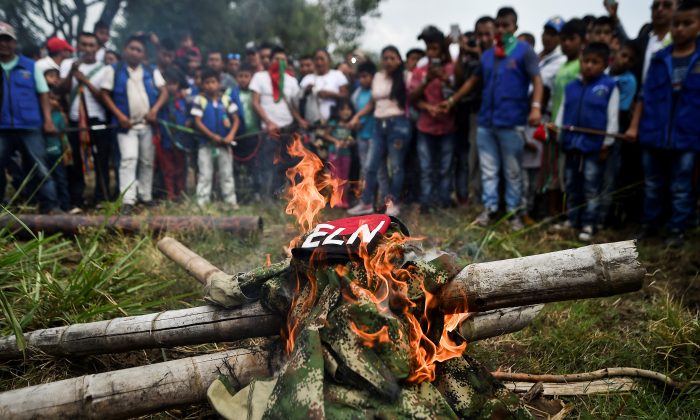 BOGOTA, Colombia—A massacre in Colombia attributed to a clash between rival leftist fighters this week shows that armed groups are still wreaking havoc in the country, even after a 2016 peace agreement.

On Oct. 30, six people were killed in a battle that the Colombian army says was between the last standing organized Marxist rebel group, the National Liberation Army (ELN), and dissident members of the demobilized Marxist group Revolutionary Armed Forces of Colombia (FARC).

While it isn’t clear whether it was civilians or combatants who were killed, the army said the clash resulted from a dispute over territory, after a FARC member was shot and killed on Oct. 29. The massacre took place in Lopez de Micay in the southern region of Cauca, an area rich in coca, the base ingredient of cocaine. violence in Cauca has soared since the peace deal was signed.

Three women and three men were killed, while two other people were injured. The military has said it will step up its efforts to provide security to civilians in the region.

While the government in 2016 signed a peace deal with the FARC–once the biggest rebel group involved in the country’s half-century civil war–allowing them to launch a political party, many disillusioned former rebels have picked up their weapons and returned to the jungle.

The rebels are said to be fighting with other groups, including the ELN, over territory in pursuit of lucrative cocaine and mining trades.

Cauca is just one area in Colombia where the peace deal has produced little improvement in security. The mayor of Lopez de Micay, Wilmer Riascos, told local media on Oct. 31 that “the big mess in the region” is due to the state “leaving us totally abandoned.”

“These illegal groups came to fight over the territory,” he added.

Right-wing paramilitaries and narcotrafficking groups are present in the southern part of the country, although leftist rebels have the largest presence. But the presence of all armed groups is something to fear—particularly because the area has historically been neglected by the state.

“In terms of sheer numbers, they [leftist groups] are the largest violent groups in Cauca right now,” Adam Isacson, the director for defense oversight at the Washington Office on Latin America, told The Epoch Times.

In July, seven people were found slain in a Cauca municipality, while earlier this month, again in Cauca, activist Maria Caicedo Muñoz was kidnapped and later found dead.

Social leaders and activists bear the brunt of the violence as illegal armed groups rush to fill a vacuum previously occupied by the FARC. About 173 of them have been killed throughout the country since the beginning of this year.

But citizens are also unsafe, with Colombia still suffering from some of the highest levels of internal displacement in the world, mostly due to armed groups. More than 90,000 Colombians were forced to flee last year due to a number of illegal armed groups fighting for territory.

“If you are a regular citizen in a highly contested part of Cauca—or another part of Colombia—you are probably feeling insecure because you’re being extorted by more than one group, or because the group that’s trying to exert control is weak and on the defensive,” said Isacson.

Colombia’s last standing rebel group, the ELN, was founded in the 1960s. Considered a terrorist group by the United States and European Union, the ELN has carried out a five-decade war against the government, engaging in bombings, kidnappings, extortion, and sabotage of oil pipelines.