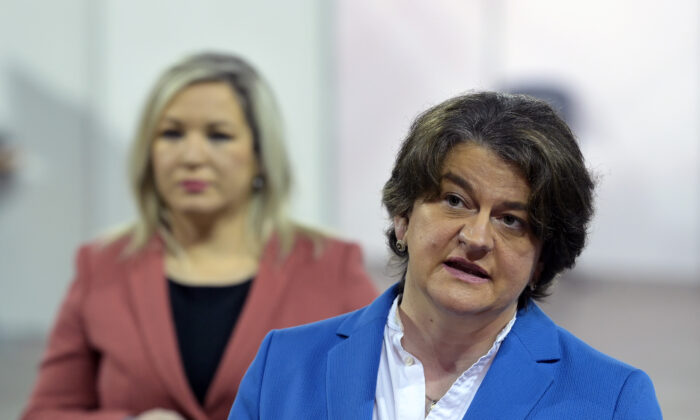 Arlene Foster Honoured By Queen Along With Rebel Conservative MP

The former leader of Northern Ireland’s Democratic Unionist Party (DUP), Arlene Foster, and four MPs have been knighted by the Queen.

Foster, 51, was the First Minister of Northern Ireland from 2016 to 2017 and again—after three years of political deadlock with Sinn Fein—between January 2020 and January 2021.

She quit as leader of the DUP in 2021 and the party’s current leader Sir Jeffrey Donaldson, wrote on Twitter: “Heartiest congratulations to Dame Arlene Foster on her inclusion in the Queens Birthday Honours List in this special jubilee year. Delighted to see Arlene recognised in this way for her leadership and enormous contribution to politics in Northern Ireland over many years.”

When British Prime Minister Theresa May lost her parliamentary majority after the 2017 general election, Foster led the DUP’s 10 MPs into a Confidence and Supply Agreement with the Conservatives which kept them in power until 2019, when Boris Johnson became prime minister in a landslide election victory after promising to implement Brexit.

The Conservative MP for Basingstoke, Maria Miller, 58, and Labour MP Nia Griffith, 65, have also been made dames in the Queen’s Birthday Honours, which coincided with the Platinum Jubilee celebrations.

Veteran Labour MP for East Ham, Stephen Timms, 66—who survived an assassination attempt in 2010 when he was stabbed by constituent Roshonara Choudhry because he had voted for the 2003 invasion of Iraq—has also been knighted, along with Conservative MP Jeremy Wright.

Wright, 49, is a former attorney general who had ironically called on Johnson to resign as leader of the Conservative Party on Monday. Wright said Johnson had done “real and lasting damage” to the government’s credibility.

Crouch, 46, was diagnosed with breast cancer in 2020 and was allowed to work from home during the pandemic as she underwent treatment.

A number of British diplomats who were on the ground in Kabul before and during the Taliban takeover of Afghanistan in August 2021 have also been honoured.

Alexander Pinfield, who was the deputy ambassador, has been made an OBE, while Martin Longden, former Charge d’Affaires of the UK Mission to Afghanistan, becomes a Companion of the Order of St Michael and St George.

Longden was deployed to Kabul after the Taliban takeover and spent two weeks in the city before moving to Qatar, where he carried on his duties until January.

The British embassy in Kabul’s head of counter-terrorism, Gemma Paolucci, has also been honoured.

Last week the House of Commons foreign affairs committee issued a report about the fall of Kabul and criticised the British government’s “fundamental lack of seriousness, grip or leadership at a time of national emergency.”

But they praised the “the personnel on the ground in Afghanistan … who implemented a chaotic policy to the best of their ability.”

PA Media contributed to this report