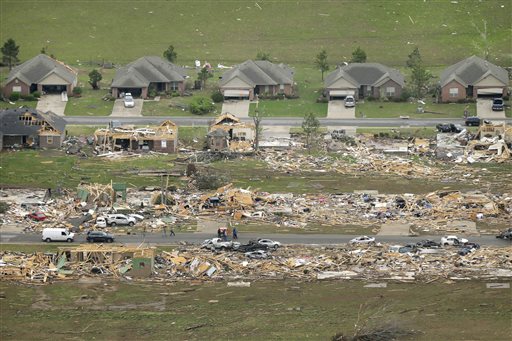 A tornado tore through 80 miles of Arkansas on Sunday, leaving a trial of destruction from near Lake Maumelle through Vilonia and other areas around the state capital.

The tornado that slammed into Vilonia, about 10 miles west of the state capital, on Sunday evening grew to about half a mile wide and was among a rash of tornadoes and heavy storms that rumbled across the center and south of the country overnight. The National Weather Service warned that more tornadoes, damaging winds and very large hail would strike in parts of Mississippi, Alabama, Tennessee and Louisiana on Monday.

The National Weather Service kept tabs on the destruction throughout the night and reported that the tornado touched down near Maumelle at 7:10 p.m. CDT, declaring a tornado emergency in the area and urging residents to take cover. The tornado later veered near Mayflower, destroying multiple homes on Highway 10, west of Little Rock, and overturning 18-wheelers near the southern end of Lake Conway, before hitting Vilonia.

At least 16 people were declared dead on Monday morning.

Video posted on Facebook showed lots of cars along highways and injured persons in or near them. Highways 365 and I-40 were shut down for many hours.

Brandon Morris, spokesman for the Arkansas Department of Emergency Management, said crews were sifting through the rubble in the hope of uncovering survivors and to assess the full extent of the destruction.

“Right now, the main focus is life safety,” Morris said. “We’re trying to make sure everyone is accounted for.”

Karla Ault, a Vilonia High School volleyball coach, said she sheltered in the school gymnasium as the storm approached. After it passed, her husband told her their home was reduced to the slab on which it had sat.

“I’m just kind of numb. It’s just shock that you lost everything. You don’t understand everything you have until you realize that all I’ve got now is just what I have on,” Ault said.

A trail of debris, bottom, leads along the path of a tornado-devastated neighborhood in Vilonia, Ark., Monday, April 28, 2014, after a tornado struck the town late Sunday. (AP Photo/Danny Johnston)

A meteorologist with the National Weather Service in North Little Rock said he was virtually certain the storm that hit Vilonia and nearby Mayflower would be rated as the nation’s strongest twister to date this year.

“It has the potential to be EF3 or greater,” meteorologist Jeff Hood said. EF3 storms have winds greater than 136 mph. “Based on some of the footage we’ve seen from Mayflower and where it crossed Interstate 40, things were wrecked in a very significant way.”

He said officials are also looking at the environmental impact. “Making sure utilities are cut off in the area. We don’t want anything to get, any fires to start or anything like that.”

The Arkansas twister shredded cars, trucks and 18-wheelers stuck along Interstate 40 north of Little Rock. After the storm passed, tractor-trailer rigs tried to navigate through the damage as gawkers captured cellphone photos of the destruction.

State troopers went vehicle-to-vehicle to check on motorists and found — with genuine surprise — that no one was killed.

“About 30 vehicles — large trucks, sedans, pickup trucks — were going through there when the funnel cloud passed over,” said Bill Sadler, a spokesman for the Arkansas State Police.

Nearby Conway Regional Medical Center said it treated about 100 people injured in the storm.

Among the ruins was a new $14 million intermediate school that had been set to open this fall.

“There’s just really nothing there anymore. We’re probably going to have to start all over again,” Vilonia Schools Superintendent Frank Mitchell said after surveying what was left of the building.

“It turned pitch black,” said Mark Ausbrooks, who was at his parents’ home in Mayflower when the storm arrived. “I ran and got pillows to put over our heads and … all hell broke loose.”

Travel trailers and motor homes are piled on top of each other at Mayflower RV in Mayflower, Ark., Sunday, April 27, 2014.A powerful storm system rumbled through the central and southern United States on Sunday, spawning tornadoes. (AP Photo/Danny Johnston)

Becky Naylor, 57, of Mayflower, said up to 22 people “packed like sardines” into her storm cellar as thetornado approached.

“People were pulling off the highways and were just running in,” said Naylor.

Men held the cellar doors tight to prevent the tornado from ripping them apart.

“It sounded like a constant rolling, roaring sound,” she said. “Trees were really bending and the light poles were actually shaking and moving. That’s before we shut the door and we’ve only shut the door to the storm cellar two times.”

The other time was in 2011, during an EF-2 tornado that followed nearly the same path and killed at least four people.

The Arkansas Department of Emergency Management raised the Arkansas death toll to 16 early Monday — eight adults and two children in Faulkner County, five people in Pulaski County and one in White County.

[View the story “mm” on Storify]