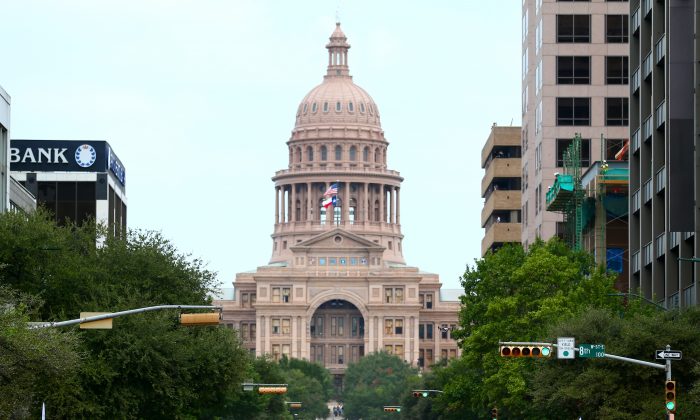 The Texas Capitol building in Austin on Oct. 29, 2014. (Dan Istitene/Getty Images)
US News

LITTLE ROCK, Arkansas—The Arkansas Senate voted Friday, April 5, to prohibit cities from refusing to cooperate with federal immigration authorities and threatened to cut off their funding if they adopt “sanctuary” policies, even though no city in the state has done so.

The majority-Republican Senate voted 24-5 for the bill, which would also prohibit cities from preventing local law enforcement from asking about someone’s immigration or citizenship status. Under the measure, a city would be ineligible for discretionary funds or grants administered by the state if the attorney general determines it is an illegal sanctuary city. The bill now heads to the majority-Republican House.

The Arkansas Municipal League, which opposes the measure, has said it doesn’t know of any city that has adopted sanctuary policies or is moving toward doing so. The Republican behind the measure said the penalties are needed to prevent any sanctuary cities from operating in the state.

“This is more a proactive measure to ward off something, some city in Arkansas saying, ‘hey, we’re going to set ourselves up as a sanctuary city,’” Sen. Gary Stubblefield said after the vote. “You do that and you do it at your own peril.”

Arkansas is among several states where Republicans have pushed for legislation banning sanctuary cities. Virginia Gov. Ralph Northam last month vetoed similar legislation, and another measure is being considered by Florida lawmakers. Neighboring Texas enacted a wide-reaching ban two years ago that was upheld by a federal appeals court last year.

Opponents have said the ban could sow distrust between the immigrant community and law enforcement. Democratic Sen. Will Bond, who opposed the bill, noted it would require the attorney general to investigate any complaint about a sanctuary city and would keep the records of that probe closed to the public. Bond also said the measure would take away the Legislature’s power by allowing the attorney general to determine whether cities are eligible to receive funds.

A spokesman for Gov. Asa Hutchinson said the Republican planned to review the measure over the weekend. Hutchinson had spoken out against a similar proposal targeting “sanctuary” colleges and universities that failed before a legislative panel two years ago.

The bill advanced the same day lawmakers sent Hutchinson legislation that would allow state colleges and universities to charge in-state tuition to students in the Deferred Action for Childhood Arrivals programs implemented during President Barack Obama’s administration that allows young immigrants living in the country illegally to remain in the U.S.

To be eligible for the in-state rate, they must have lived in the state three years prior to admission and had graduated from high school or received a general equivalency diploma in the state.

The measure would also apply to immigrants from the Marshall Islands and children of immigrants on temporary work visas. Hutchinson plans to sign the measure into law. A large concentration of Marshallese immigrants live in northwest Arkansas.

That bill won support after past efforts to extend in-state tuition to immigrants who came to the country illegally as children had failed in the Legislature.