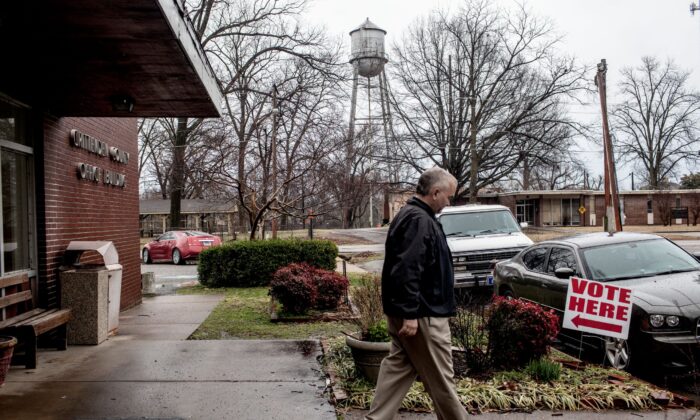 A voter walks out of the polling location inside the Critteden County courthouse building after casting his ballot on March 1, 2016, in Marion, Arkansas. Arkansas has 40 Republican delegates and 32 Democratic delegates at stake in their primary. (Photo by Andrea Morales/Getty Images)
2022 Midterm Elections

Arkansas voters will decide on May 24 the primary winners in gubernatorial and U.S. congressional races.

Sanders has said during the campaign that she would seek to protect conservative Arkansas from the radical national agenda pushed by liberal lawmakers in Washington. She proposes to phase out state income tax to give taxpayers a pay raise amid inflation, support police to enforce the law, and expand public-funded school choice programs.

Washburn, an anti-establishment candidate, has said that Walmart, which is headquartered in the state, and other big corporations have controlled state politics for too long.

As an outsider, he said he would bring about real conservative changes to the state, including cutting the size of government and banning the teaching of critical race theory at schools.

According to a poll conducted this month by local media Talk Business & Politics and Hendrix College among 802 likely Republican primary voters, Sanders was favored by 72.5 percent of respondents, and Washburn got 16.5 percent. The poll is said to have a margin of error of 4.3 percent.

Boozman, who was first elected to the Senate in 2011, is the ranking GOP member on the Senate Agriculture, Nutrition, and Forestry Committee. He has been endorsed by Trump, Sanders, and fellow GOP Sen. Tom Cotton.

Bequette, a political outsider, has the financial backing of Illinois billionaire Richard Uihlein, who contributed $1 million to the Arkansas Patriots Fund to run TV ads in support of Bequette, according to campaign finance data.

According to the poll, Boozman was favored by 45 percent of respondents; Bequette got 19 percent, Morgan got 16.5 percent, with Loftis at 1.5 percent.

Three Democratic candidates, Natalie James, Dan Whitfield, and Jack Foster, are competing to be their party’s nominee for Senate.

Reynolds, a retired military intelligence officer, is running against Hill partly because Hill voted to establish a commission to probe the Jan. 6, 2021, breach of the Capitol. He has the endorsement of retired U.S. Army Lt. Gen. Michael Flynn.

A primary winner must secure a majority of the total votes cast; if no candidates meet the threshold, a runoff will be held between the top two finishers on June 21.