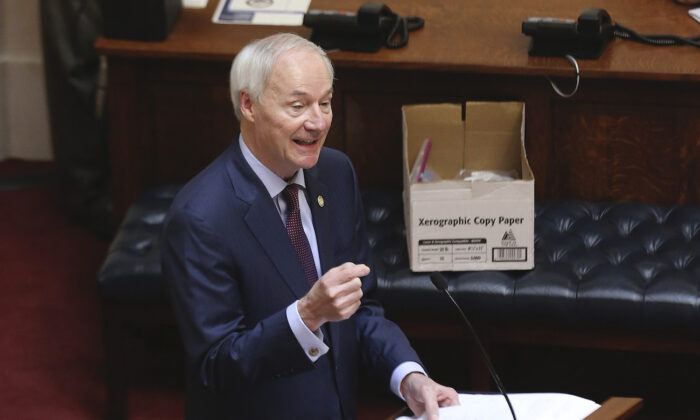 “The resistance is hard in some areas. And part of it is simply because of the controversy because of the mandates. It deepens the resistance. And so, that’s something we have to overcome,” Hutchinson, a Republican, said on CNN’s “State of the Union.”

“But I don’t see that controversy going away any time soon. With OSHA issuing mandates for businesses to require vaccination of employees, that’s going to intensify the controversy.”

President Joe Biden’s administration is preparing a rule that would require private employers with more than 100 workers to require proof of COVID-19 vaccination or weekly COVID-19 testing. The rule is being promulgated by the Occupational Safety and Health Administration (OSHA).

Hutchinson, who has received a COVID-19 vaccine, has said that mandates are effective in increasing uptake of the COVID-19 vaccines. He’s also defended businesses that impose vaccination requirements on workers. But he’s resisted imposing a statewide mandate.

Such a requirement “would probably increase vaccination rates,” he said.

“But it also would increase the resistance of some,” Hutchinson said. “Some would lose their job. It would hurt their families. And it would, in the broader population, also create that controversy and resistance. So it’s a balance there.”

Private businesses should have the ability to impose mandates but not be forced to, according to the governor, who opposes banning so-called vaccine passports or requiring proof of vaccination to work or enter certain businesses or venues.

“It’s an important debate on liberty. And my view has always been, which I believe is consistent with the principles of our party, that let’s stay out of interfering with those private business decisions,” he said on NBC’s “Meet the Press” earlier this month.

Arkansas lawmakers have differed from the governor in some respects when it comes to vaccines. Republicans passed a measure that allows workers to opt-out of mandates by proving they had COVID-19 and recovered, or natural immunity. Hutchinson allowed it to go into effect on Oct. 13 because lawmakers could have overridden his veto.

Hutchinson told CNN that his focus has been on educating state residents about the vaccines.

“People will make the right decision over time when they get the right information,” he said. “What works in Arkansas is not the mandate side of it, but it’s the education side and businesses having the prerogative to make their own decision without the government telling them what to do.”

Approximately 48 percent of Arkansas residents are fully vaccinated or have gotten both Moderna or Pfizer shots or the single-shot Johnson & Johnson vaccine.

Like many U.S. states, Arkansas has seen COVID-19 metrics drop in recent weeks. Active cases were fewer than 5,500 on Oct. 23, and fewer than 400 COVID-19 patients were in hospitals in the state.

Federal health officials have argued that mandates are effective and have defended their legality, even in the face of requirements being linked to widespread business disruptions and thousands of workers being fired.