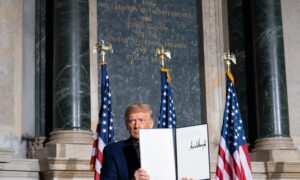 A pair of bills introduced in the Arkansas legislature last week would prohibit the use of public school funds to teach certain race-centered curricula.

The House Bill 1231 would restrict state funding from going to public schools that teach a curriculum based on the New York Times’ 1619 Project, which portrays the United States as an inherently racist nation founded upon slavery.

The 1619 curriculum, developed by Pulitzer Center, was embraced by many public school districts across the nation, notably in Chicago, Illinois; Buffalo, New York; Newark, New Jersey; and Washington.

Republican state Rep. Mark Lowery, who sponsored HB 1231, told Arkansas Democrat-Gazette that his bill is modeled after a U.S. Senate bill proposed by Sen. Tom Cotton (R-Ark.), which would prohibit the use of federal money to fund the teaching of the 1619 curriculum.

“I think it’s appropriate and correct to present that information to students. What is not appropriate is being able to theorize, use, specifically, critical race theory,” Lowery said.

Lowery also co-sponsored the House Bill 1218, which prohibits public schools and colleges from offering courses, events, and activities that promotes the division or resentment between groups of people based on race, gender, political affiliation, and social class. He said the bill is intended to free students from humiliating school programs that use critical race theory.

“One of the specific examples is what is called the privilege walk—where all the students start in one line and a number of questions are asked,” Lowery told KATV, a local ABC affiliate. “Do you have two parents, do you parents own their home, take steps forward and what it does then—it gives this definition of showing which students are supposedly privileged and which ones are not.”

The bills comes amid a series of reversals of Trump-era policies, as part of President Joe Biden administration’s effort to embrace “racial equality.”

In one of his first actions as president, Biden dissolved the advisory 1776 Commission, which is commonly seen as a counter to the 1619 Project. The Biden administration claimed in a press release last week that the commission “has sought to erase America’s history of racial injustice.”

Also abolished was a September 2020 executive order of then-President Donald Trump that banned federal agencies, contractors, subcontractors, and grantees from instructing their employees to follow the tenets of the critical theories. Trump’s order said the concepts of the theory are “divisive” and lead to “race and sex stereotyping and scapegoating.”

The Biden administration said such training is “important and needed,” adding that federal agencies shall consider reinstating any contracts that were canceled or restricted under Trump’s order.