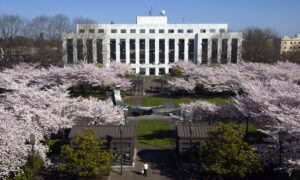 Arkansas Attorney General Leslie Rutledge asked the Supreme Court to review a decision by the 8th Circuit Court of Appeals that struck down a state law blocking abortionists from terminating a pregnancy solely because the unborn child has Down syndrome.

Rutledge, a Republican, is challenging the appeals court’s finding that the U.S. Constitution guarantees a right to selectively abort unborn children with Down syndrome.

Rutledge announced the filing April 13, the same day as the 6th Circuit Court of Appeals narrowly reversed a lower court’s injunction blocking a similar Ohio statute that forbids abortions to be carried out because of fetal Down syndrome.

The Ohio law, H.B. 214, “prohibits a doctor from performing an abortion with the knowledge that the woman’s reason for aborting her pregnancy is that her fetus has Down syndrome and she does not want a child with Down syndrome,” the appeals court stated in its 9–7 ruling in Preterm-Cleveland v. McCloud. The case seems destined to reach the Supreme Court, which is now regarded as having a 6–3 conservative majority whose members may be interested in curbing abortion rights.

Rutledge issued a statement about the Arkansas case.

“The Constitution does not require Arkansas to permit discrimination-by-abortion against Americans with Down syndrome,” Rutledge said.

“Through my personal friendships, I know that while individuals with Down syndrome may have an extra chromosome, they also have extra love and joy they share unconditionally, and I will not stand by while God’s gifts are exterminated as has been done in other countries.”

The appeal is Rutledge v. Little Rock Family Planning Services, court file 20-1434. The 292-page petition for certiorari, or review, was filed with the Supreme Court on April 9. The respondents in the case, consisting of the abortion clinic, a Planned Parenthood affiliate, and physicians Stephanie Ho and Thomas Tvedten, are required to respond to the petition by May 13.

In 2019, the Arkansas General Assembly approved Act 619, the Down Syndrome Discrimination by Abortion Prohibition Act. It forbids a practitioner from performing an abortion if the woman is seeking the abortion “solely on the basis of” a diagnosis of Down syndrome or based on any other indication of Down syndrome.

Arkansas has a “powerful interest in protecting its citizens with Down syndrome from the grotesquely stigmatic messages that selective abortion sends them,” the petition states.

When new technology allows pregnant women to determine their unborn children have Down syndrome, “false stereotypes and misinformation from doctors with little knowledge of the condition lead over two-thirds of women who receive a Down-syndrome diagnosis to choose abortion,” the petition states.

Aided by the American Civil Liberties Union (ACLU), the respondents filed a lawsuit in June 2019 seeking to prevent Act 619 from coming into force. Claiming the law “will have a devastating effect on women seeking to access abortion in the state,” the respondents claim in their original legal complaint that Arkansas has been engaged “in a targeted campaign against abortion, enacting more than 25 laws aimed at obstructing and interfering with women’s access to abortion in the State, including at least 12 enacted in 2019 alone.”

They challenged the statute, which they said was one of three Arkansas laws that fly “directly in the face of longstanding Supreme Court precedent and are the latest in Arkansas’s unrelenting campaign to deny women the health care they seek and to which they are entitled.”

A U.S. district court blocked the law, preventing it from taking effect. In January, the 8th Circuit upheld the lower court’s order.

Holly Dickson, executive director and legal director for the ACLU of Arkansas, criticized Arkansas for appealing to the Supreme Court.

“In recent weeks, Arkansas politicians have conducted a dangerous and unlawful attack on essential health care, and the attorney general’s action is no different,” Dickson told The Epoch Times in an emailed statement.

“It’s also part of a long history of attacking the right to abortion in our state. If this law were to take effect, it would do nothing to address the ableism or discrimination that people with disabilities face in housing, health care, education, or the workplace. This is nothing more than an attempt by politicians to exploit the fight for disability rights to further their anti-abortion agenda.”