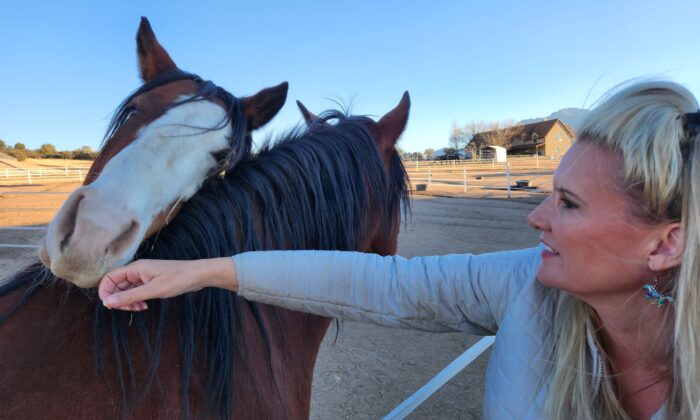 PRESCOTT, Ariz.—Simone Netherlands grabbed a handful of green alfalfa hay and called out to Apache, who was guarding a small band of Alpine wild horses at the opposite end of the corral.

The young stallion lowered its head warily and remained motionless at seeing a visitor standing beside her.

“C’mon,” Netherlands said to the horse gently, waving the hay and coaxing the animal to come over.

Slowly, Apache stepped forward to the edge of the metal fence, poked his nose through, and began munching on the moist straw until it was all gone.

To her visitor, Netherlands said, “He has a gorgeous mane. They’re so cute. You want to pet them.”

But it was still much too soon for Apache.

When Apache first arrived at the wild horse sanctuary weeks ago, he was depressed—grieving, Netherlands said.

Several in his band had been shot and killed in early October in an organized act of cruelty deep inside the Apache-Sitgreaves National Forests in eastern Arizona.

The horse death toll is now at 41. Some had gunshot wounds in the belly, lungs, and face, and were left to die where they fell.

Somehow, a few managed to survive their wounds.

There are still no suspects, and “nobody takes responsibility for it,” Netherlands said. “There’s just a lot of unjustified hate over wild horses. It’s hard to understand.”

The U.S. Forest Service buried several dead horses in mass graves, their locations revealed only by the newly turned soil.

Netherlands said it’s only a matter of time before volunteer field watchers discover even more carnage within the 2.7-million-acre forest.

“We believe there were over 50 killed,” Netherlands said. “We have 11 still missing.”

Volunteers with the Salt River group and Alpine Wild Horse Advocates have been keeping track of the horses using a software application with their cell phones.

Each horse has been given a name, logged, and photographed.

“So, we let the public name them because they love to be involved. That personalizes them—’Oh, they caught Apache.’ But to see them butchered—shot in the woods”—Netherlands said that was the work of “monsters.”

And it has shaken her faith in humanity.

In Apache’s band, Kiowa and Amari are the few last ones standing. Those shot and killed will live in pictures on the wild horse advocacy groups’ Facebook pages.

The Forest Service plans to round up the remaining Alpine herd—some 200 horses—and sell them at online auctions as “unauthorized livestock” until they are all sold.

Even after the October killings ceased, the Forest Service didn’t stop rounding up the horses, Netherlands told The Epoch Times.

“Almost every day, we continue to find more [carcasses], and we still think they are all from the same event.”

In light of the unexplained shootings and systematic roundups, wild horse advocates feel they’re in a race as they scramble to buy as many horses before the “kill buyers” do. The kill buyers will transport and sell the horses to slaughterhouses in Mexico.

The Army for Alpine Wild Horses, a collaboration of wildlife sanctuaries and horse advocates, purchased 105 of the original 400 wild horses in the Apache-Sitgreaves herd as a result of public donations. The total cost was around $11,000.

Netherlands said the volunteers would only stop buying them once they could save as many horses as possible and place them in permanent homes.

“It’s a lot of money,” she said. “The sad thing is that there’s not a lot of interest or good homes for them. It’s hard for the public to handle wild horses. You’ve got to know the method; sometimes, it fails.”

The Forest Service will hold another online auction on Dec. 10.

It’s an unhappy dilemma, Netherlands said. If the wild horse advocates can’t find good homes for the horses, “we can’t rescue them.”

In the worst-case scenario, many horses could end up in meat processing factories south of the border to be sold internationally.

“It’s very desperate. It’s just so much stress on the people that love them,” Netherlands said.

Fortunately for Apache and 11 other recent wild horse rescues, the Salt River sanctuary will be their home—perhaps for the rest of their lives.

The Forest Service views the horses as invasive livestock, subject to removal. Wild horse advocates consider them a historic breed dating back to the early Spanish explorers of North America.

Netherlands said that an Arizona state historian is confident these are authentic wild horses worthy of federal and state protection. However, the Forest Service said there’s no evidence the horses are anything but “feral” livestock encroaching on government land.

“They are considered unauthorized livestock and therefore fall under livestock regulations over which the state has jurisdiction,” the Forest Service told The Epoch Times in an email.

The Salt River group used humane birth control to limit the growth of the herd population, even though the Forest Service didn’t show much interest, Netherlands said.

“This year, we only had one foal in the entire year. That compared to 100 foals in 2019. So everyone can see now that it’s working.”

Still, the Forest Service said it has no legal authority to implement a birth control program since the horses don’t come under federal jurisdiction.

Another alternative solution would be to craft legislation to protect the horses. Wild horse advocates are working to accomplish this at the state level, though it may come too late to save the remaining horses.

As for the recent killings, Arizona has only confirmed that 30 horses died in the October incident. Because the Forest Service does not have jurisdiction, “and because of the ongoing nature of the investigation, we cannot offer further information,” the agency said.

The Arizona Department of Agriculture is in charge of the investigation. Netherlands said the evidence includes DNA samples and bullets taken from the dead horses, including a knife with fingerprints found at the scene.

The Forest Service said its policy to remove the horses is a “necessary step” to ensure that the forest is “healthy and sustainable for years to come.”

As feral horses, they don’t receive protection under the 1971 Wild Horse and Burro Act.

“These feral horses cause substantial problems for not only native plants and animals … but they also destroy watersheds and negatively impact ecosystems,” the Forest Service said on its website.

The Salt River group disagrees with the government’s label and recently commissioned horse geneticist Gus Cothran to examine tissue samples from the carcasses to determine if they are, in fact, Alpine wild horses.

A favorable determination could change everything—legally.

Since the Forest Service considers the horses a threat to endangered species like the New Mexico meadow jumping mouse, the solution is to round up the horses and sell them at auction.

“It truly is an outrage. We’re buying [the horses] because we have no other choice,” Netherlands said. “But sadly, only about 100 are left in areas still accessible where people can see them.”

The highest recent bid price for a horse sold at auction was $975. Others have sold for as little as $50, Netherlands said.

The Salt River group hopes to purchase bands of horses to keep the family bonds intact.

“There are only two options. Either we buy them, or the kill-buyer buys them. We only want to bid against the bad buyer.”

To complicate matters, the Forest Service recently announced a series of controlled burns involving thousands of acres of the Apache-Sitgreaves forest where many Alpine wild horses live.

“It’s just another attack on the wild horses and their habitat. If fences are in the way, they get stuck and burn,” Netherlands said.

“They’re trying to convince us that the wild horses eat all the growth, they’re bad for wildlife, they can’t live together with cows—that is the propaganda causing all the anger.

“So now, they’re burning this forest. Do you think the [endangered] mice won’t burn?”

“If the conditions on the ground are appropriate, along with many other factors including potential air quality and available resources, then prescribed fire projects move forward.”

If any part of the process falls “beyond allowable limits,” the Forest Service said it will reschedule the project until a “more appropriate window of opportunity arises.”

Wild horse advocates such as Netherlands say they’d prefer the horses to coexist with ranch cattle and wildlife and that there’s plenty of space and grassland.

“It’s about learning to share our public lands. Everyone gets a piece of it,” she said. “There’s a win-win solution in this for everyone.

“The herd is declining in population numbers. The public still gets to see them. They buy a day pass; the Forest Service gets the revenue. So they are an important recreational resource.”

Sanctuary From the Hunt

At least for now, the Salt River sanctuary is the next best habitat for rescued wild horse Apache, with a private stall, acres of fenced grassland, and plenty of food to eat.

When Apache arrived at the sanctuary, the trauma of losing members of his band was evident in his sullen behavior. The sight of humans was a further cause for anxiety.

Netherlands said it took her weeks to gain a measure of Apache’s trust.

Even now, the chocolate brown stallion is skittish and aloof with strangers, like many other new arrivals. They include yearlings, adult mares, and stallions.

“So, in the beginning, we had to feed [the yearlings] milk pellets. Because horses that young can’t live only on grass,” Netherlands said.

“What’s up, gals?” she said to a pair of Alpine mares coming to eat hay out of her hand.

Netherlands said she tries to stay positive through it all, hoping those who oppose the wild horses one day will see the national forest for the historic trees.

“It would be an absolute atrocity if we got rid of this animal that has always been a part of Arizona. It is the animal that brought us here—the animal on whose back we built this country,” Netherlands said.

“We have such little respect for them. We paint pictures of them. We have statues of them. But when it comes to the real horse, nobody cares.”

CORRECTION: A previous version of this report misstated the group that purchased the wild horses. The Epoch Times regrets the error.