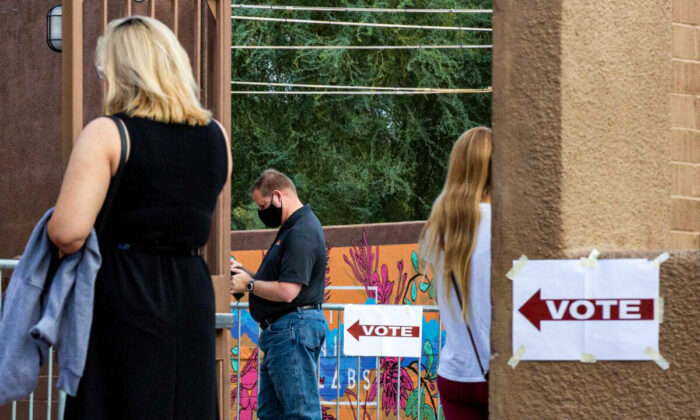 Arizona on Friday vowed to fight a possible Biden administration lawsuit that would challenge a new state law that ensured only U.S. citizens can vote in Arizona elections.

According to a July 1 letter by Arizona Attorney General Mark Brnovich, the U.S. Department of Justice (DOJ) intends to file a lawsuit against it.

In his letter, Brnovich said that Arizona would defend the law up to the Supreme Court if necessary and “defeat the federal government’s efforts to interfere with our state’s election safeguards, as I did last year in Brnovich vs. DNC.”

In Brnovich v. Democratic National Committee, the Supreme Court ruled 6–3 in favor of two Arizona election policies, finding they did not violate the Voting Rights Act nor had a racially discriminatory purpose.

“It is curious, however, that the Department of Justice would use its resources to challenge a common sense law in Arizona designed to guard against non-citizen voting, while the Biden Administration is simultaneously opening our borders to encourage a flood of illegal immigration,” Brnovich wrote in his letter (pdf) to DOJ Assistant Attorney General Kristen Clarke.

“Is the federal government attempting to undermine our sovereignty and destabilize our election infrastructure? I hope that is not your intention.

“I strongly urge you to reconsider your pursuit of this misguided suit and to instead recognize Arizona’s constitutional authority to conduct lawful and secure elections,” he wrote.

Brnovich published his letter on Twitter, writing: “After Biden invites millions to illegally enter our country, his DOJ is challenging Arizona’s law to ensure only citizens can vote. Alas the clouds part to show the true sky. We’ll see you in court!”

After Biden invites millions to illegally enter our country, his DOJ is challenging Arizona’s law to ensure only citizens can vote.
Alas the clouds part to show the true sky. We’ll see you in court! pic.twitter.com/7dHgh1i4xh

Thousands of Voters Without Proof of Citizenship

In a March 30 letter (pdf) explaining his support for the legislation, Arizona’s governor noted that there was a “growing number” of voters who have not provided evidence of citizenship.

“In 2014, when the federal form was first used to register Arizona voters who failed to provide evidence of citizenship, a mere 21 voters statewide voted using that method in the primary election,” Ducey wrote.

“In the 2020 general election, that number climbed to over 11,600. In just Maricopa County alone, there are currently 13,042 active registered voters who have not provided evidence of citizenship to vote through the use of the federal form.”

Ducey declared that safeguarding election integrity meant “counting every lawful vote and prohibiting any attempt to illegally cast a vote.”

He said HB 2492 “is a balanced approach that honors Arizona’s history of making voting accessible without sacrificing security in our elections.”