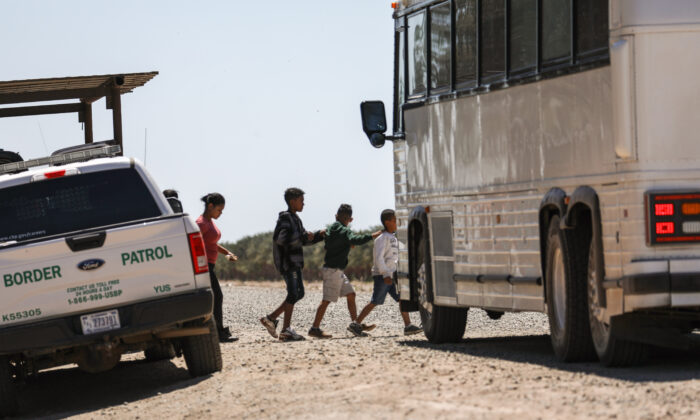 A bus picks up a group of illegal aliens for Border Patrol near the U.S.-Mexico border in Yuma, Ariz., on April 13, 2019. (Charlotte Cuthbertson/The Epoch Times)
Immigration & Border Security

Arizona Town to Declare ‘State of Emergency’ Over Border Crisis

The mayor of an Arizona town said he will declare a state of emergency over the crisis at the southern border.

Gila Bend, a town near Arizona’s border with Mexico, has a population of only 2,000 people.

Mayor Chris Riggs told Fox News he is placing the blame on the Biden administration for transporting illegal immigrants on buses to his town, noting that, particularly due to the ongoing CCP (Chinese Communist Party) virus pandemic, they don’t have the necessary resources to take care of the influx.

“Border Patrol let us know that they were going to be dropping migrants that had been detained for 72 hours in our town, which we really didn’t understand because we have nothing here,” Riggs told Fox.

He explained that they have not received any federal or state assistance, and that the illegal immigrants being dropped off in his town can’t get food, lodging, or COVID testing.

The mayor told the news outlet that crime has gone up in Gila Bend recently, with about 20 illegal crossers coming into the town on foot almost daily.

Riggs said that the cost for COVID-19 testing of two busloads of people a week would cost around $600,000 over a year.

Last week, the National Sheriff’s Association said that up to 50 percent of illegal immigrants are testing positive for COVID-19, the disease caused by the CCP (Chinese Communist Party) virus.

Earlier this month, Arizona took legal action (pdf) to block new federal immigration regulations, saying that these would cause negative consequences for the state.

The new rules would limit the capability of ICE to detain some illegal immigrants unless they pose a threat to national security, entered through the border after Nov. 1, or committed aggravated felonies.

The Biden administration says that the rules don’t impair arresting or deporting people, but the officers in the field would need to request permission from their superiors to arrest people outside of the aforementioned cases.

“If asked about the poorest policy choice I’ve ever seen in government, this would be a strong contender,” Arizona Attorney General Mark Brnovich said in a statement. “Blindly releasing thousands of people, including convicted criminals and those who may be spreading COVID-19 into our state, is both unconscionable and a violation of federal law. This must be stopped now to avoid a dangerous humanitarian crisis for the immigrants and the people of Arizona.”