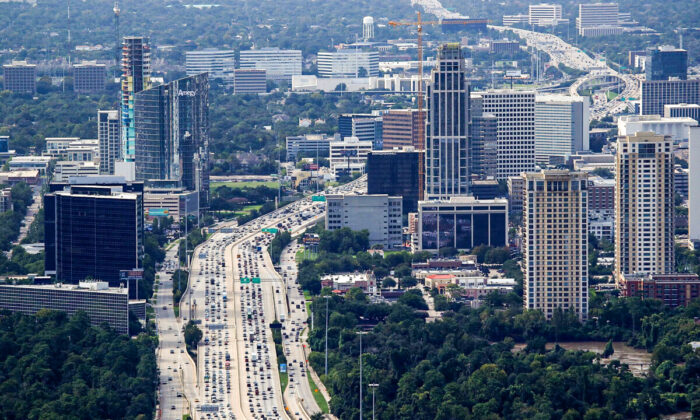 Traffic backs up on a freeway in Houston, Texas, on Sept. 5, 2017. (Justin Sullivan/Getty Images)
Economy

Arizona, Texas Have Recovered All Jobs Lost During Pandemic

Arizona and Texas have recovered all jobs lost during the CCP (Chinese Communist Party) virus pandemic, thanks to an influx of coastal urbanites and businesses into the states in recent years.

These two states have now joined the ranks of Idaho and Utah for a full jobs recovery. The latest statewide data from Texas, dating back to November, indicates that the Lone Star State has added 28,000 more jobs than it counted in February 2020; with Arizona, Idaho, and Utah adding 5,000, 14,500, and 61,000 new jobs, respectively.

If the pattern continues, this may foreshadow a broader trend, in which about one-third of U.S. states will return to pre-pandemic job numbers by the middle of the current year, according to Moody’s Analytics economist Adam Kamins. These states, mostly Republican-leaning and clustered in the American interior, are continuing to benefit from a number of demographic and economic trends which have drawn a steady trickle of coastal transplants and their capital to the Midwest, Rocky Mountains, and Southwest regions.

Meanwhile, economic recovery has been stunted in the coasts, with the affluent states of the Northwest and the Pacific burdened by high costs of living, rising crime rates, and onerous CCP virus restrictions.

Demographers have predicted an exodus from the coasts to the American interior for years, but the pattern has greatly accelerated as a result of the ongoing pandemic and its downstream consequences. All four of the states which have reported job growth since February 2020 are alike in holding relatively relaxed pandemic restrictions, which have blunted the impact of the CCP virus on these states’ economies.

“Arizona rapidly returned to its prior peak of employment because compared to the nation we didn’t fall as far,” University of Arizona economist George Hammond told The Wall Street Journal. “One big reason is because the stay-at-home order in Arizona wasn’t very restrictive.”

This economic opportunity is a leading factor in the new wave of migration to the oft-overlooked American interior. Data from the U.S. Census Bureau indicates that Texas has led the nation in total population growth in the period from July 2020 to July 2021, with a net population growth of 310,000 new people. Meanwhile, Arizona, Idaho, Montana, and Utah have led the nation with the largest percentage growth in population during the same period.

Despite the post-pandemic success of these sunbelt hubs, a familiar economic picture is playing out in the states, which struggle with many of the same challenges as the national economy. In rapidly growing cities such as Phoenix and Dallas, the influx of people from the coasts has occasioned a construction boom, but companies are finding it difficult to meet demand with a still-ongoing labor shortage. And these states haven’t been spared by inflation and supply chain issues, which are especially prevalent in the more remote hubs of the American interior which do not possess the advantage of megalopolis-spanning supply chains to blunt the impact of these disruptions. Nonetheless, job growth continues in these states unabated, and their cities in particular all well-positioned to face future economic tribulations as their economies continue to thrive.