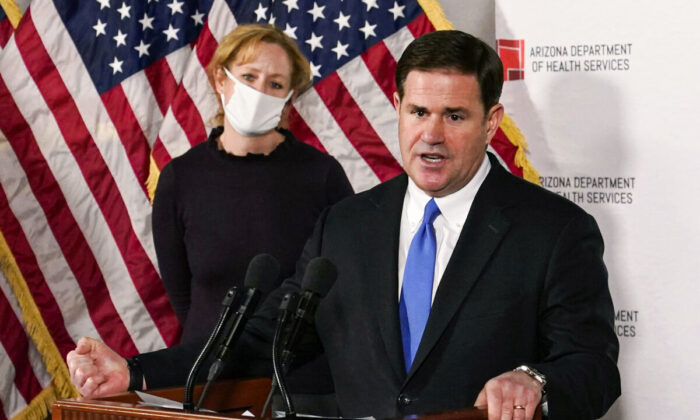 The Arizona Supreme Court on Tuesday unanimously upheld a lower court judgment blocking bans on masks in public schools, ruling that the measure and other Republican-passed state laws are unconstitutional.

Tuesday’s ruling came less than two hours after the seven justices heard arguments in the state’s appeal of a trial court judge’s ruling. The justices had hammered Solicitor General Beau Roysden with questions about the Republican-controlled Legislature’s inclusion of such measures in unrelated budget bills.

Cooper’s ruling in September effectively cleared the way for Arizona cities and counties to impose mask mandates. At least 29 public school districts had defied the laws and enacted their own mask requirements.

The judge found that provisions in three budget bills, including the ban on school mask mandates, violated the title rule. Cooper blocked those provisions while allowing the rest of the bills funding education, universities, and health to take effect.

She entirely struck down another budget bill because it violated the single subject rule under the state constitution, that says that each bill must cover but one subject with each item properly connected to others. The state constitution also says that the titles of each bill must reflect the contents, and give lawmakers and the public adequate notice of what’s included.

Arizona is one of several states where Republican governors have pushed to block local governments and school districts from imposing mask mandates. Critics of mask mandates have argued that such rules infringe on personal liberty and are ineffective at preventing the spread of viruses, while proponents of the measures have said they are necessary to curb the transmission of COVID-19, the disease caused by the CCP (Chinese Communist Party) virus.

According to data compiled by Burbio, masks are currently required at schools in 69.4 percent of the 500 largest districts nationwide.

C.J. Karamargin, a spokesman for Arizona Gov. Doug Ducey, said, “We are extremely disappointed in the ruling,” adding that Arizonans should be free to make their own health decisions.

“There are three separate co-equal branches of government, and we respect the role of the judiciary—but the court should give the same respect to the separate authority of the Legislature,” Karamargin said in a statement.