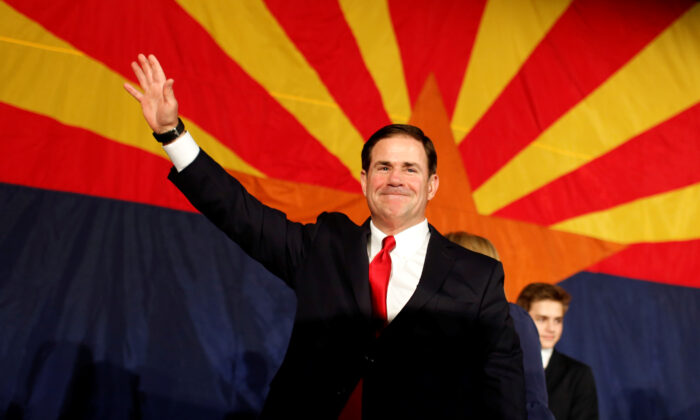 The Supreme Court of Arizona found 5–2 on Aug. 19 that a referendum backed by organized labor aimed at blocking a planned $2 billion per year state-level income tax cut violated the state constitution.

On April 21, the court overturned a lower court ruling allowing the referendum to move forward but hadn’t explained the reasoning behind its decision until now.

A 2020 referendum to hike taxes on high earners and boost education spending was previously struck down by state courts.

The Arizona Constitution allows voters to prevent legislature-approved laws from taking effect by challenging them in a referendum. They have to collect the signatures of at least 5 percent of qualified voters to place the matter on the ballot.

But the state constitution provides that laws “for the support and maintenance of the departments of the state government and state institutions” can’t be put to a referendum. The Supreme Court of Arizona determined that the lower court was wrong when it ruled the tax cut could proceed to referendum because it didn’t appropriate money.

“We conclude the exemption from the referendum power for laws ‘for the support and maintenance of the departments of the state government and state institutions,’ Ariz. Const. art. 4, pt. 1, § 1(3), applies to tax revenue measures,” Justice John Lopez IV wrote in the state Supreme Court’s opinion (pdf).

“A revenue measure is exempt from referendum, regardless of the increase or decrease in revenue, provided it is for the support and maintenance of existing departments of the state government and state institutions.”

Invest in Arizona, a political action committee backed by a teachers’ union, had wanted to place a referendum question on the ballot in the upcoming Nov. 8 election in hopes of repealing an income tax reduction approved in 2021 by the Republican-dominated legislature and signed into law by Republican Gov. Doug Ducey.

Attorneys for the Arizona Free Enterprise Club argued in the case that the Arizona Constitution doesn’t permit referendums to move forward that challenge the “support and maintenance” of state government.

Justice Lopez accepted that argument, writing that the constitutional exemption from voter referendums for legislation dealing with the “support and maintenance” of government covers more than just appropriations.

“Conditioning the referendum exemption on the revenue effect of a support and maintenance measure is a fool’s errand that raises myriad questions concerning the temporal scope of the inquiry and rests on the vagaries of economic projections,” Lopez wrote.

After the April ruling, Ducey hailed the court’s decision.

“This ruling is another big win for our state’s taxpayers and it couldn’t have come at a better time,” the governor said. “With inflation hitting Arizonans hard, this decision ultimately means more of their hard-earned dollars can stay in their wallets.”

State Senate Minority Leader Rebecca Rios, a Democrat, said at the time she was “disappointed to say the least” at the ruling.

“A true Democracy should have no problem allowing this to go before the voters of Arizona,” Rios said. “Republicans continue to attack our schools, teachers and students, despite a majority of Arizonans making it clear time and time again that they want meaningful investments in our public schools.”