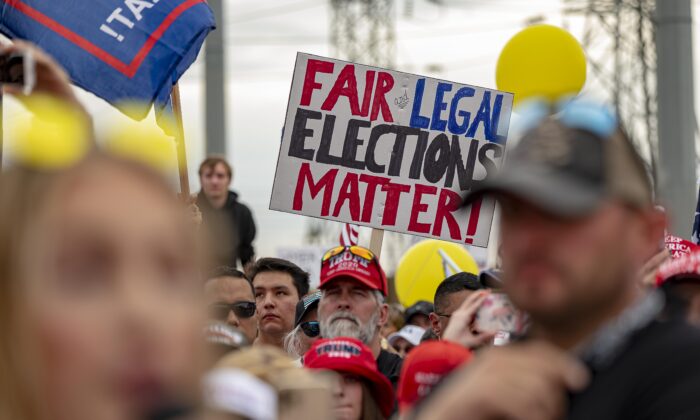 Supporters of President Donald Trump in front of the Maricopa County Election Department while votes are being counted in Phoenix, Ariz., on Nov. 6, 2020. (Olivier Touron/AFP via Getty Images)
Arizona

Republican Arizona state representatives called on Monday for decertification of the state’s election results in order to maintain public confidence in the integrity of the election.

“I believe that America is on a precipice” and that the “2020 election has been stolen,” Arizona State Rep. Anthony Kern (R-LD20) said at an event on Monday.

“I definitely support the president; it’s not just about one man. This is about the integrity of our electoral process, not just in Arizona, but in the United States of America, and if we lose this today, we will lose it forever,” Pam Kirby, the 1st vice-chair of the Arizona GOP said.

About two dozen Arizona Republican legislators, legislators-elect, and members of the Republican party called on the state’s leaders to take action on claims of election fraud.

“This isn’t about President Trump. This is about a true and transparent election,” said Arizona State Rep. Walter Blackman (R-LD6).

But Arizona House Speaker Rusty Bowers said on Dec. 4 that he thinks the state legislature cannot intervene in appointing electors.

“Nothing in the U.S. Constitution or the decisions of the U.S. Supreme Court even suggests that the Arizona Legislature could retroactively appoint different electors who would cast their ballots for 2 different candidates,” he said.

Kirby said that the Republicans have various fronts to fight on: lawsuits have been filed and legislators can call for decertifying the election. Arizona has over 28,000 duplicate ballots with strong indications of irregularities.

The Supreme Court of Arizona rejected a GOP filing to overturn the election result on Dec. 9, and said the margin between Biden and President Trump is not narrow enough to trigger an automatic recount. They cited case law concluding that honest mistakes or omissions don’t change the validity of an election.

Kirby and her GOP colleagues said that they are pushing two things forward: getting lawsuits to the United States Supreme Court so it can examine evidence and judge the case based on the Constitution; and calling for a special session of the Arizona state legislature to get enough votes to nullify the electors or to send electors for Trump.

Kern said that what is happening in the United States is familiar to those from socialist countries. “One election took them over the precipice,” and socialists got control in countries like China.

State Sen. Sonny Borrelli said nobody likes tyranny, as mankind was not meant to be tyrannized. Americans are free people, born free, and should stay free.