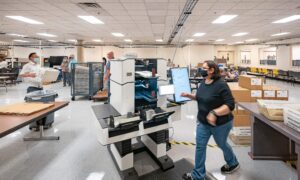 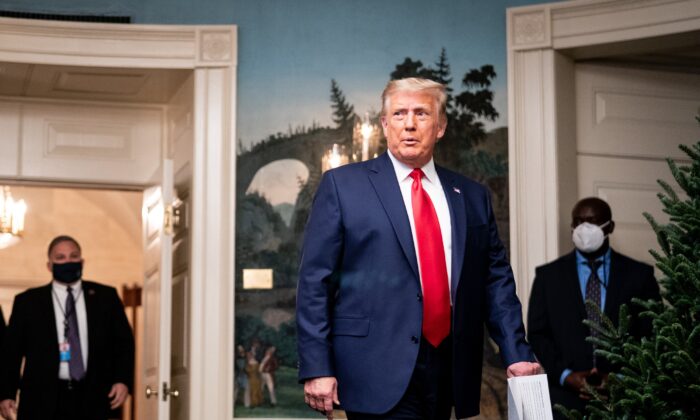 President Donald Trump arrives to speak in the Diplomatic Room of the White House in Washington, on Nov. 26, 2020. (Erin Schaff - Pool/Getty Images)
Arizona

Republican members of the Arizona State Legislature are scheduled to hold an election integrity hearing on Nov. 30 that will include President Donald Trump’s lawyers Jenna Ellis and Rudy Giuliani.

Giuliani, Ellis, and others held a hearing in front of Pennsylvania State Republican senators on Wednesday, where they argued that the state legislature should take steps to reclaim the ability to appoint electors to the Electoral College. Witnesses who claimed they saw allegedly illegal or irregular vote-tabulation efforts in the Keystone State also offered statements.

According to GOP members of the Arizona State Legislature, the hearing is designed “to gather the evidence that justifies calling a special session to contemplate what happened and take immediate action accordingly.”

“We are pleased that the State Legislatures in Pennsylvania, Arizona, and Michigan will be convening hearings to examine the November 3rd presidential election,” Ellis said in a statement provided by the GOP lawmakers.

Meanwhile, like some GOP senators in Pennsylvania have said, the Arizona lawmakers noted that the U.S. Constitution grants state legislatures the power to hold election hearings on alleged irregularities and fraud.

“As established in Article 2, Section 1.2 of the United States Constitution, State Legislatures have the sole authority to select their representatives to the Electoral College, providing a critical safeguard against voter fraud and election manipulation,” their statement said.

As is the case in Pennsylvania, Democrat Joe Biden’s lead over Trump in Arizona is razor-thin. Biden has around an 11,000-vote lead over the president.

During the Pennsylvania hearing, Ellis and Giuliani suggested that legislatures have the ability, granted under the Constitution, to appoint state electors.

Republican state Senator Doug Mastriano said Friday that the Pennsylvania State House and Senate, both controlled by the GOP, could make a move to reclaim its power to appoint electors.

“So, we’re gonna do a resolution between the House and Senate, hopefully today,” he told Steve Bannon’s War Room on Friday. “I’ve spent two hours online trying to coordinate this with my colleagues. And there’s a lot of good people working this here. Senate resolution saying we’re going to take our power back, we’re gonna seat the electors. Now obviously we’re gonna need the support of the leadership of the House and Senate, we’re getting there on that.”

There is “so much evidence of shenanigans and fraud, we can’t stand aside and just watch this unfold around us,” the Republican lawmaker said. Elaborating, he added, “If there’s extensive shenanigans out there it’s up to the General Assembly to step in. So we have a fight on our hands and we’re gonna fight. We’re gonna take the fight all the way to the Supreme Court if we have to.”