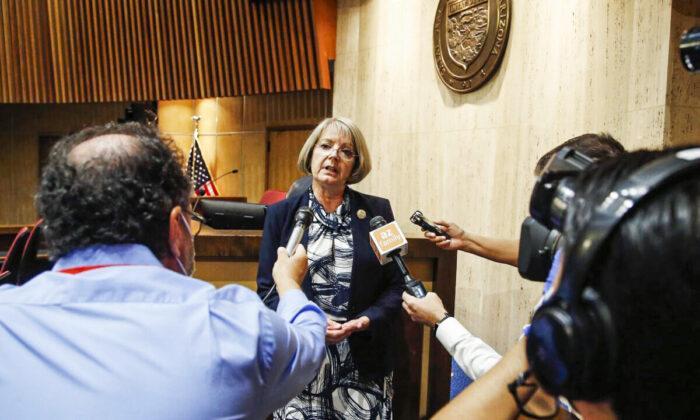 Arizona Senate President Karen Fann Announces She Will Retire in 2023

Arizona Senate President Karen Fann on Nov. 1 announced she will be retiring when her current term ends in January 2023.

“It has been a privilege to advocate on behalf of Arizona citizens in my twelve years at the State Legislature and the honor of a lifetime to serve as Senate president,” Fann, a Republican, said in a statement.

“I look forward to a successful session in 2022 advancing policies that benefit all Arizonans, and then enjoying the life my husband and I have built for ourselves in retirement with our family.”

Fann, 67, has had 28 years of public service in local government and at the Arizona Legislature. She was first elected to the Arizona House of Representatives in 2011. She was elected to a seat in the Arizona Senate in 2016 and served as Senate president since 2019.

The Republican-led Arizona Senate authorized the forensic audit of the 2020 presidential election in Maricopa County, the state’s largest county, which started in late April, after months of contending with county executives in a legal battle. Fann issued subpoenas requesting that Maricopa County turn over 2.1 million ballots, its vote-counting machines, election department servers, and computers.

Fann forwarded the findings to Arizona Attorney General Mark Brnovich recommending further investigation. Brnovich, a Republican running for the U.S. Senate, said he was going to “take all necessary actions that are supported by the evidence and where I have legal authority.” His office said that its Election Integrity Unit “will thoroughly review the Senate’s information and evidence.”

Maricopa County executives have previously repeatedly denied any allegations of corruption and maintained that the election was carried out in a secure manner and the results yielded were accurate.

Fann told The Associated Press the election audit and the national attention it brought did not factor into her decision to retire after the 2022 legislative session. Last month, she told the news agency she was still considering whether to seek reelection to her seat as the District 1 senator or seek another term as Senate president.

Fann was the owner and CEO of Arizona Highway Safety Specialists, a construction company that installs guardrails and signs on state and local highways throughout Arizona. She sold the company earlier this year in March, after 37 years of ownership. Fann said she doesn’t have specific retirement plans.

Fann’s announcement about her impending retirement comes as Adrian Fontes, who was the Maricopa County Recorder during the 2020 election, issued a statement Nov. 1 saying he was contacted by Brnovich’s office on Oct. 28 and was later interviewed by a special agent over processes followed at the Maricopa County Recorder’s Office during the 2020 election.

A spokeswoman for Brnovich’s office told KTAR, “We cannot comment on any specifics of an ongoing investigation.”