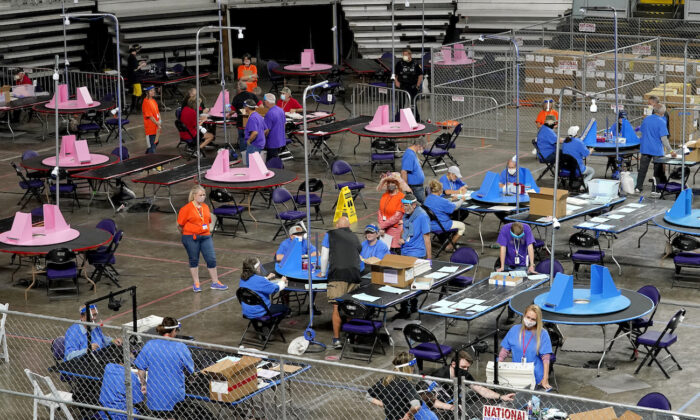 Maricopa County ballots cast in the 2020 general election are examined and recounted by contractors working for Florida-based company Cyber Ninjas, at Veterans Memorial Coliseum in Phoenix, on May 6, 2021. (Matt York, Pool/AP Photo)
By Jack Phillips

Arizona Senate President Karen Fann, a Republican, said the state Senate doesn’t have the ability to recall electors for the Nov. 3, 2020, election, after a fellow Republican lawmaker called for new elections.

Fann told One America News Network (OANN), which has been covering the audit of Maricopa County, that the upper chamber has the ability to provide auditors with the materials they need—including through the use of subpoenas—but the certification of electors is a different matter.

“The Senate body—we do not have the authority to do that. So, this is what we have said, and I want to make this very clear on the record,” the Republican state leader said on July 16.

Fann’s comments came as former President Donald Trump issued a statement declaring that the audit revealed there were irregularities and fraud that would have swayed the election in his favor last year. On July 15, the Senate held a hearing in the midst of a months-long review carried out by Florida-based tech firm Cyber Ninjas and teams told lawmakers they discovered discrepancies.

Doug Logan, CEO of Cyber Ninjas, told senators that auditors couldn’t find any record of Maricopa County sending more than 74,000 mail-in ballots and also discovered that around 18,000 people voted, but were taken off voter rolls “soon after the election.” He also noted that there were “11,326 people who were not on the voter rolls on Nov. 7, 2020, but appeared on the rolls on Dec. 4, 2020, and 3,981 people who voted after registering after Oct. 15, 2020.”

After the hearing, some Republican senators called for Arizona’s 11 electors—who went for Biden—to be recalled.

“A new election must be conducted. Arizona’s electors must not be awarded fraudulently & we need to get this right,” Sen. Wendy Rogers, a Republican, wrote in a pair of Twitter posts last week.

But Fann, in her OANN interview, said that the Senate in this situation only has “the ability to subpoena information because we make laws,” noting that they’re “entitled to have the information to determine how to write those laws.”

“That’s why we are successful in court, and that’s what we’re doing. It’s all about election integrity. It’s not about the Trump–Biden race. It’s not about the Kelly–Martha McSally race,” Fann remarked, referring to the 2020 presidential election that saw the inauguration of President Joe Biden, as well as the U.S. Senate race that was won by Sen. Mark Kelly (D-Ariz.).

Following the hearing, Maricopa County officials and Democrats such as Secretary of State Katie Hobbs claimed that the audit team and Senate Republicans are incompetent and said their findings shouldn’t be taken seriously.

For months, Maricopa County executives and Republican senators were embroiled in a legal tug-of-war over the county’s ballots and election equipment. Ultimately, a judge ruled that the Senate does indeed have the subpoena power to carry out the audit, which began in April.

Maricopa County Board of Supervisors Chairman Jack Sellers, a Republican, said in a statement after the hearing that “what we heard today represents an alternate reality that has veered out of control since the November General Election” and “Senate leadership should be ashamed they broadcast the half-baked theories of the ‘Deep Rig’ crowd to the world today.”

Rogers’ office didn’t respond to a request for comment by press time.