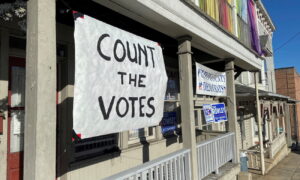 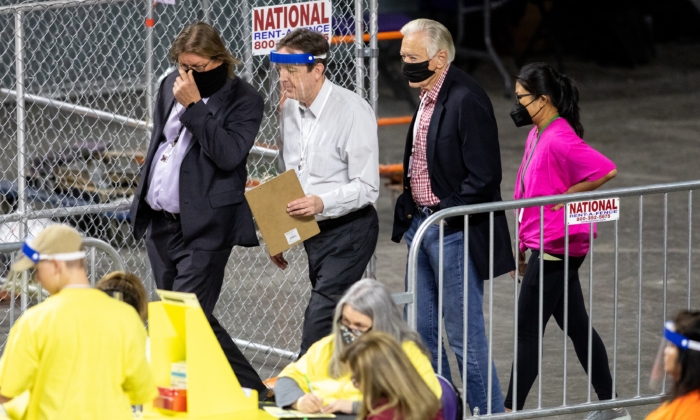 The Arizona Senate’s liaison for the 2020 election audit taking place in the state’s largest county is considering resigning after being barred from the audit on July 23.

Ken Bennett, the liaison and a former Republican Arizona secretary of state, said Monday he was blocked from entering the audit last week because people there were upset he had shared data from the audit with outside parties who have been heavily critical of the election review.

“I shared some box counts of how many ballots were in each box and that got leaked to the press,” Bennett told radio host James Harris. “That’s how I got barred from the audit.”

The data was given to three voting analysts who have repeatedly denigrated the audit and auditors. One, Benny White, has repeatedly traded barbs with Benny Blehm, a Cyber Ninjas attorney, on Facebook.

Cyber Ninjas was hired by the Arizona Senate to conduct the audit of ballots cast in Maricopa County last year, as well as machines used to run the election.

Being blocked from the audit was the last straw, Bennett said. He also described issues with the counting of duplicate ballots and aggregation.

For instance, when opening boxes of duplicate ballots, officials found some lacked serial numbers, a violation of state law. That indicated it would be difficult to match some of the duplicate ballots with the ballots that needed to be duplicated.

“I asked the auditors, when we’re done with the duplicates, please give me a comprehensive reconciliation of: were we able to identify one of these for every one of those. And that has not been forthcoming now for two months,” Bennett said.

There’s also contention over a third ballot count taking place which is supposed to serve as a check on the county’s number and the Cyber Ninjas-led count. Bennett expressed concern the count was not being done independently of Cyber Ninjas, which could influence the process.

Bennett said he spoke with Senate President Karen Fann and apologized to her and the Senate for sharing data with the group of election analysts.

“I had promised that information would not be leaked to the press but that indirectly got done,” he said.

The details were published initially by The Arizona Republic, which also spoke with Larry Moore, a retired Clear Ballot executive who is one of the analysts.

Moore told the paper that the numbers he was given matched nearly perfectly with figures his group came up with by utilizing publicly available data. He claimed that undermined a hand count tally by Cyber Ninjas, which has not been made public but is different from that of the county.

A Cyber Ninjas spokesperson told the paper that Bennett was blocked from the building by Fann’s office.

Fann told The Epoch Times via email that Bennett “is a valuable asset to the senate audit and will continue to be so.”

Fann plans on including Bennett in a review of the auditors’ draft report when it is ready.

“Regarding access to information: our Senate members nor I have access to the numbers of the ongoing audit except for the information we were provided at the public hearing a week and a half ago. You know what we know. The auditors were hired to do a job. We should not be looking over their shoulder, telling them how to do their job or asking for premature information. When the audit is complete then they will need to provide us with all their proof and documentation of their results,” she added.

Cyber Ninjas did not respond to a request for comment. Maricopa County officials have asserted any findings of irregularities are wrong.

Bennett said Monday he remains committed to the audit.

“It is absolutely critical that we answer in the minds of people the question of whether or not they can trust their elections,” he said, adding that he hopes to stay onboard helping coordinate aspects of the review not conducted by Cyber Ninjas.

The final report on what auditors found is expected to be released next month. The auditors are expected to wrap up their physical work by the end of the work and start to finish analyzing the data for the report.