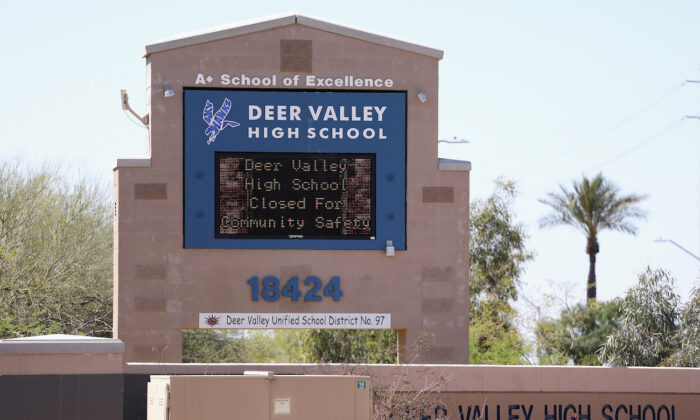 A sign indicating school closure due to the spread of the CCP virus is displayed at Deer Valley High School in Glendale, Ariz., on April 2, 2020. (Christian Petersen/Getty Images)
Arizona

Arizona School Board Member Apologizes for Cursing at Meeting

The head of the Scottsdale (Arizona) Unified School District (SUSD) Governing Board—one of four members facing a recall election by petition—is in hot water for using an expletive at a public meeting.

“I apologized during the board meeting, as well as to individual parents who have written in and in the news. To be clear, I should not have said what I said and I am very sorry for this mistake. It will not happen again,” SUSD President Jann-Michael Greenburg told The Epoch Times in an email.

On Aug. 24, the five-member board held a meeting where parents who wished to comment were asked to remain outside the building until they were called in.

At the beginning of the meeting, Greenburg discussed recent protests over a new mask mandate and other incidents that he described as “escalations.”

The public was given limited access to the meeting to ensure safety. Greenburg asked that community members and speakers “remain civil” during the meeting.

At the beginning of the meeting, Greenburg discussed a recent incident involving the discovery of “neo-Nazi” fliers at one school campus.

One parent who spoke claimed an employee of the district was responsible for distributing copies of the comic book “White Will” by William L. Pierce III, author of “The Turner Diaries.”

“I stopped that speaker and clarified that the statement was false and no employee was involved,” Greenburg said. “In reality, during the first week of our investigation an employee was suspected of being the culprit. However, that employee was shown to be innocent and the real culprit was apprehended two weeks later when he attempted to distribute more copies on the same campus. He was caught by Scottsdale Police Department, which was surveilling the area.”

“Because there are many people familiar with this incident and who the suspected employee was, I wanted to be very clear that the employee is, in fact, innocent. Placing an identifiable employee’s reputation, job, and potentially safety on the line is not acceptable to me,” he added.

After the speaker left the podium, Greenburg is seen on the YouTube video leaning over to a board member. He is then heard whispering the expletive before saying “these people.”

Greenburg acknowledged he made the remark, which prompted a call for his resignation by one parent and letters from others.

Parents Seek to Oust Board Members

According to the Arizona School Board Association (ASBA), there is no sanction, fine, or disciplinary action under the organization’s code of conduct for the use of inappropriate language by a school board member short of a recall election.

Two recall election petitions are currently being circulated within the SUSD, which seek to oust Greenburg and fellow board members Julie Cieniawski, Patty Beckman, and Libby Hart-Wells, claiming their leadership has been detrimental to student health and education.

“It’s not acceptable,” said Patricia Lee Pellet, a Scottsdale resident, of Greenburg’s use of inappropriate language during a board meeting.

“He showed how he honestly feels about the parents and their kids that night,” Pellet told The Epoch Times.

Pellet is one of two parents who filed a recall election petition against the four board members.

She names Greenburg, Cieniawski, and Hart-Wells for removal. Scottsdale resident Nicole Curtis seeks to remove Beckman through the special election.

Other school officials in other state districts have also faced censure over the recent use of foul language.

Earlier this month, the vice chairman of Jefferson County’s school board in Louisville, Kentucky, resigned his position after saying “[expletive] you” to a state senator on social media, according to local media.

In August 2020, a member of the Mount Ascutney School District Board in Vermont stepped down after she dropped an F-bomb during a zoom meeting streamed by more than 70 people.