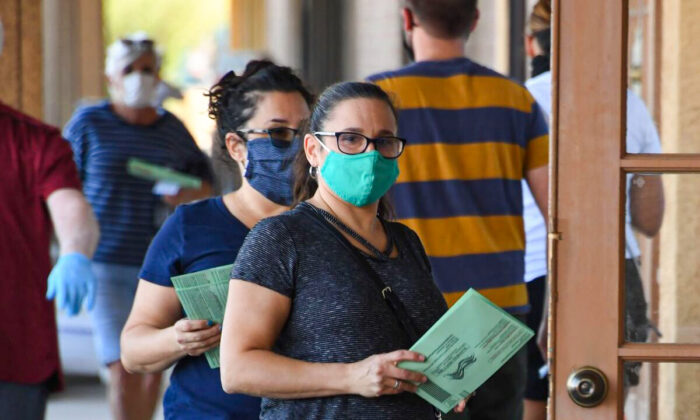 People wait in line to drop off mail-in ballots at an early voting location in Phoenix, Arizona on Oct. 16, 2020. (Robyn Beck/AFP via Getty Images)
Election Integrity

The Arizona Republican Party has filed a lawsuit seeking to remove absentee voting and no-excuse mail-in voting in the state.

In the suit filed on Friday, the political party argued that “in-person voting at the polls on a fixed date (election day) is the only constitutional manner of voting in Arizona.”

In the petition to the court (pdf), attorneys noted a provision in the state Constitution, which says that official ballots are to be provided “at the next regular general election” in “such manner that the electors may express at the polls their approval or disapproval of [a] measure.” The attorneys argued that “at the polls” means ballots must be cast at in-person polling places.

“Stated simply, Arizona’s ‘early voting’ statutes—which provide for ‘absentee’ or ‘no-excuse mail-in’ voting—violate the Arizona Constitution, in whole or in part,” the petition reads. Arizona’s early voting statutes should be struck down, Republicans told the court.

The no-excuse mail-in voting system was adopted in Arizona in 1991. Republicans in the suit said that if the state Supreme Court does not decide to strike down the early voting statutes, then it should revert to the mail-in voting rules in place prior to 1991, which means voters would need to have a “valid reason” to vote by mail.

The latest suit was filed by the state GOP and Yvonne Cahill, the party’s secretary. Arizona Secretary of State Katie Hobbs, a Democrat, is named as the respondent in the case.

Republicans also raised the topics of signature verification and drop boxes with regard to mail-in voting.

“If adopted into the EPM and approved by the Governor and Attorney General, the procedures would have the force of law, and their violation would be punishable as a misdemeanor,” they said. But since Hobbs failed to do so, “county recorders are not required” to follow the procedures.

“The Secretary’s failure to include the guidelines in the EPM is not only remiss but also perpetuates inconsistent and non-uniform signature verification procedures by allowing her and the various Arizona counties to create and change their own procedures at will, whatever those may be, without the safeguard of the Governor’s and the Attorney General’s approval.”

The Republican Party also alleged that Hobbs exceeded her authority by allowing drop boxes to be used to collect mail-in ballots.

“Exceeding her legal authority, [Hobbs] has prescribed rules in the EPM allowing county officials to ‘develop and implement procedures’ for placing drop-boxes, including ‘unstaffed drop-box[es],’ in various locations throughout the several counties,” they wrote.

They are asking the Arizona Supreme Court to decide what they call “purely legal” questions of the case before the next election cycle, with early voting set to start Oct. 12 for the state’s general election on Nov. 8.

“Whether the Secretary must include signature verification guidelines in the EPM, whether she may create drop-box rules without legal authority, and whether mail-in voting statutes are constitutional (a question that requires this Court to interpret the Arizona Constitution) are purely legal questions of first impression that Arizona courts have never addressed,” they noted.

Republicans furthermore asked the court to eliminate ballot drop boxes, prohibit ballot counting before election day, or prohibit voting absentee on initiatives and referendums. The GOP did not challenge absentee voting for members of the military, which the state is required to allow by federal law.

In a response to the lawsuit, Hobbs said on Twitter: “Our early voting system is secure and popular. This lawsuit filed by the Republican Party of Arizona has a single aim—to make it more difficult to vote.

“I look forward to once again defending the voters of Arizona and defeating this ridiculous attempt to undermine our elections.”

The Epoch Times has reached out to Hobbs for additional comment.

Raquel Terán, a state senator and chairwoman of the Arizona Democratic Party, said the lawsuit “is yet another attempt by the Arizona Republicans to make it harder for people to vote.”

In 2020, 90 percent of Arizona voters used a ballot that arrived in the mail, which can be returned through the U.S. Postal Service, an official drop box run by county election officials or to a polling place. The ballots are collected at a central warehouse, where workers confirm the signature on the outside of the ballot envelope matches signatures on file to verify the vote is legitimate.

Separately, on Monday, the Arizona legislature approved a measure that will boost voter ID requirements required for both in-person and mail-voting.