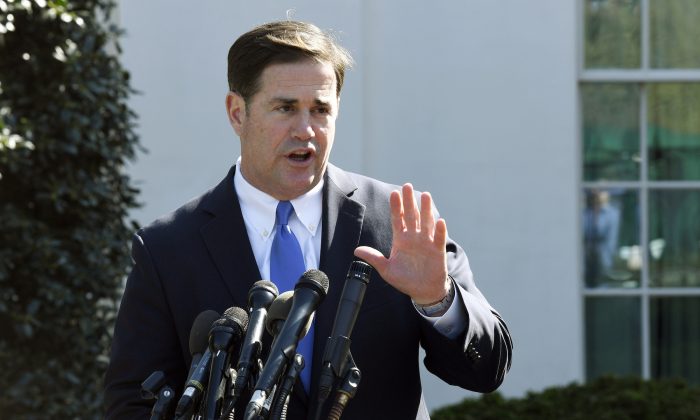 Arizona Gov. Doug Ducey talks to reporters outside the West Wing of the White House in Washington on April 3, 2019. (AP Photo/Susan Walsh, File)
US News

The governor of Arizona has withdrawn state incentives for Nike to set up a new manufacturing site after the shoe company reportedly pulled a Fourth of July-themed sneaker because of concerns that it featured an “offensive” older version of the U.S. flag.

Then he read a Wall Street Journal article that reported Nike had halted the release of its Independence Day sneakers because former NFL player Colin Kaepernick said that the 13-starred “Betsy Ross flag” was “offensive.”

Writing on Twitter in a series of posts in the early morning of July 2, Ducey said, “Nike has made its decision, and now, we’re making ours.”

“I’ve ordered the Arizona Commerce Authority to withdraw all financial incentive dollars under their discretion that the State was providing for the company to locate here. Arizona’s economy is doing just fine without Nike. We don’t need to suck up to companies that consciously denigrate our nation’s history.”

“I am embarrassed for Nike,” Ducey wrote.

Today was supposed to be a good day in Arizona, with the announcement of a major @Nike investment in Goodyear, AZ. THREAD—>
1/

According to The Wall Street Journal, Kaepernick complained that the Betsy Ross flag was created in a period of American history when slavery was widespread.

The shoe is still featured in social media advertisements.

“Nike has chosen not to release the Air Max 1 Quick Strike Fourth of July, as it featured the old version of the American flag,” a spokeswoman for the company said, according to Market Watch.

Describing the action as a “shameful retreat,” Ducey said that Nike should be proud of America’s history, not abandon it. “This country, our system of government and free enterprise have allowed them to prosper and flourish,” he wrote.

“Nike has apparently decided that Betsy Ross is unworthy, and has bowed to the current onslaught of political correctness and historical revisionism.”

In his final post, Ducey wrote: “It shouldn’t take a controversy over a shoe for our kids to know who Betsy Ross is. A founding mother. Her story should be taught in all American schools. In the meantime, it’s worth googling her.”

According to the WSJ, Kaepernick declined to comment for their report on the withdrawal of the sneaker. Citing sources familiar with the matter, The Wall Street Journal said that Kaepernick “told the company it shouldn’t sell a shoe with a symbol that he and others consider offensive.”

Kaepernick, who stirred controversy in 2016 by kneeling during the pre-game playing of the U.S. national anthem, teamed with Nike last year to become the face of a new campaign that harnessed his credentials as a protester, rather than as a sportsman.

The new ad marked the 30th anniversary of Nike’s “Just Do It” slogan, and said: “Believe in something. Even if it means sacrificing everything,” featuring a closeup of Kaepernick’s face.

Kaepernick, a former quarterback for the San Francisco 49ers, started kneeling during the national anthem as it played before games in 2016, saying it was a protest against what he perceived as police mistreating minority communities. He also blamed racism. Some other players have followed suit.

On May 23, 2018, the league banned players from taking a knee during the anthem, but allowed them to go to the locker room while it plays.

On July 20, 2018, the NFL shelved the policy while negotiating with the players’ union, the National Football League Players Association (NFLPA), which filed a grievance against the anthem policy on July 10.

Kaepernick’s actions proved controversial, and helped propel Nike’s name into the headlines. But many Americans said they would boycott the NFL and Nike because they felt that they were failing to respect “The Star-Spangled Banner.”

Many people took to social media to post videos of themselves burning NFL products and beloved Nike sneakers.

The cancellation of the Fourth of July sneaker prompted a similar response from some people.

“I’m so tired of this!” wrote one person on Facebook. “I’ve worn Nike all my life. I don’t own any other brand of shoe. But now, I will be looking to support a different company with my dollars!”

Another wrote, “Hey Nike, what about the rest of the US that didn’t think it was offensive, you have lost my business.”