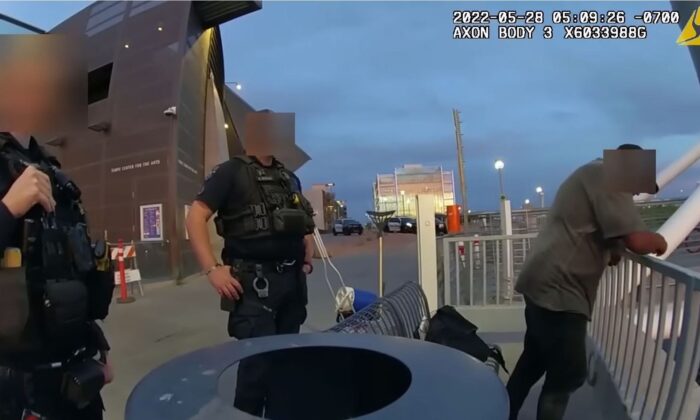 Police bodycam footage shows the police officers talking to Sean Bickings before he gets into Tempe Town Lake in Tempe, Ariz., on May 28, 2022. (City of Tempe)
Arizona

Three police officers from Tempe, Arizona, have been placed on leave following an incident during which they watched a man jump in a lake and drown last month.

“Tempe has asked the Department of Public Safety (DPS) and Scottsdale Police to examine the Tempe Police response to the drowning,” a June 3 news release by the Tempe city administration said. “The three Tempe police officers who responded to the call and witnessed the drowning have been placed on non-disciplinary paid administrative leave pending the investigations, as is customary in critical incidents.”

The incident took place on May 28 when officers at the Tempe Police Department responded to reports of a verbal domestic confrontation between a man and a woman at around 5:00 a.m. When officers arrived at the scene, Sean Bickings, 34, and his wife told them that they were only having a discussion and that the man had not committed any physical violence against her.

Neither of the two parties was detained for any offense. However, the officers told the couple that they were running both their names through a database to identify whether they had any outstanding arrest warrants, a common procedure.

Before the check was completed, Bickings climbed over a 4-foot fence, walked to a lake, and told police that “I am going for a swim. I am free to, right?” according to USA Today. He then jumped into the lake. Officers warned that swimming in the lake was not allowed.

Around 30 to 40 yards after swimming, Bickings indicated that he was under distress and began seeking aid. “I’m going to drown. I’m going to drown,” he said. An officer responded by saying, “No, you’re not.” The police asked Bickings to keep swimming and hold onto a pylon. One officer told Bickings, “I am not jumping in after you.”

The man soon went under. A rescue team from the city fire department came over shortly afterward, recovered Bickings’ body, and pronounced him dead before 11:30 a.m.

Representatives with the Tempe Officers Association, the city’s police union, defended their officers, noting that they are neither trained in water rescues, nor do they have the equipment to help people who are drowning. “No one wanted this incident to end as it did,” they said, according to NBC News.

“Attempting such a high-risk rescue could easily result in the death of the person in the water and the officer, who could be pulled down by a struggling adult,” the group said. “Officers are trained to call the Fire Department … or get the Tempe Police boat. That is what officers did here.”

On Friday, the police released a portion of the footage of the incident recorded on one of the officer’s cameras. Additional footage from all three officers at the site is expected to be released this week.