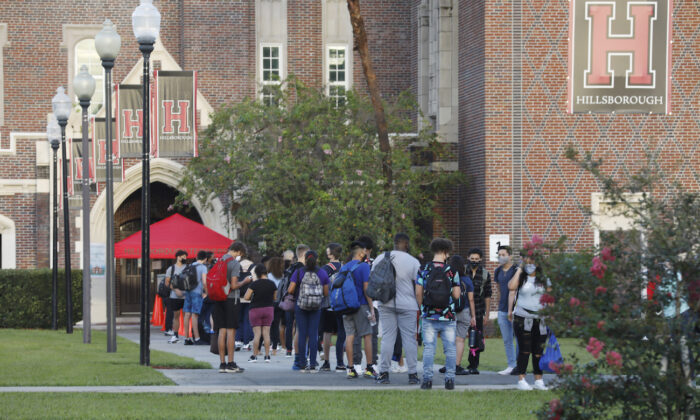 Students at Hillsborough High School wait in line to have temperature checked before entering the building in Tampa, Fla., on Aug. 31, 2020. (Octavio Jones/Getty Images)
Florida

The Republican-majority Arizona House on June 25 approved a bill that could mandate that school teachers share stories from people who fled communism as part of the curriculum.

The requirement is part of House Bill 2898 (pdf), which includes changes in laws governing K–12 education in the state. The language was inserted by Republican state Rep. Judy Burges, and states that the measure will prepare students to be “civically responsible and knowledgeable adults.”

Public schools would be required to teach “a comparative discussion of political ideologies, such as communism and totalitarianism, the conflict with the principles of freedom and democracy essential to the founding principles of the United States” among other changes, the bill’s text states.

Arizona’s Department of Education must also develop new civics education standards for school districts and charter schools to include, such as on the original intent of America’s Founding Documents and principles of the United States, including the expectation that U.S. citizens will be responsible for preserving and defending “the blessings of liberty inherited from prior generations and secured by the United States Constitution.”

The education board would also have to develop a list of oral history resources that provide “patriotism based on first-person accounts of victims of other nations’ governing philosophies who can compare those philosophies with those of the United States.”

“The reality is [that] one of the greatest threats facing the globe today is communism and totalitarianism,” Republican state Rep. Jake Hoffman said, Capitol Media Services reported. “We have governments like the communist Chinese government, that their stated goal is to be the world’s sole and only superpower, and that they will achieve that goal through any means possible.”

The legislation now heads to the state Senate for consideration.

The measure advanced days after Florida Gov. Ron DeSantis signed an executive order on education that pushes back against critical race theory, and also creates an education program that will require students to be taught about “the evils of communism.”

In short, high schools must provide “instruction on the evils of communism and totalitarian ideology,” DeSantis said, noting that there are Florida residents who have escaped totalitarian regimes and communist dictatorships, such as from Cuba and Vietnam, to live in America.

“We want all students to understand the difference,” he said. “Why would somebody flee across shark-infested waters … why would people leave these countries and risk their lives to be able to come here? It’s important that students understand that.”

DeSantis on June 22 also signed into law HB 5, which requires the Florida Department of Education to develop an integrated K–12 civic education curriculum that includes teaching students about citizens’ shared rights under the Constitution and Bill of Rights.