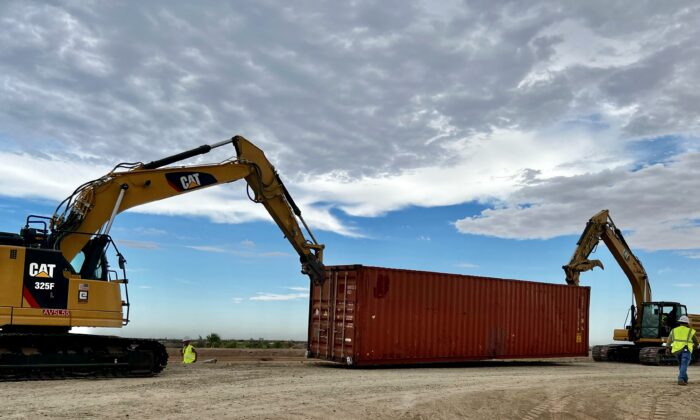 The containers will be reinforced with concertina wire at the top, according to the governor, who issued an executive order for the work to begin on Aug. 12.

“Arizona has had enough,” Ducey, a Republican, said in a news release.

“We can’t wait any longer. The Biden administration’s lack of urgency on border security is a dereliction of duty. For the last two years, Arizona has made every attempt to work with Washington to address the crisis on our border.”

Contractors started placing the shipping containers on Aug. 12 and expect to complete the 1,000-foot gap in the border wall on Aug. 14. It’s expected to cost $6 million.

The stacked shipping containers will reach about 22-feet high and will be linked together and welded shut, Ducey said. The existing border wall constructed during the Trump era is 30-feet high.

Border Patrol agents in the Yuma Sector have experienced the largest spike in apprehensions along the southern border since President Joe Biden took office.

During fiscal year 2022, minus three months still to be reported, border agents have arrested more than 162,700 illegal crossers, according to Customs and Border Protection data.

Yuma Mayor Doug Nicholls declared an emergency in his city on Dec. 9, 2021, due to an overwhelming influx of illegal aliens.

During that influx, the local 911 dispatch center was tied up for hours with calls from illegal aliens asking for transport, food, and clothing, Yuma County Sheriff Leon Wilmot told The Epoch Times.

Nicholls said Yuma—which has nearly 100,000 residents—doesn’t have the resources to handle the thousands of people now crossing.

“The surge of migrants the federal government has allowed to trek over the border has the grave potential to greatly impact and strain our community,” Nicholls said on Aug. 12 in a press release. “Washington must send a clear message that this is not the way to immigrate to our country.”

Biden halted all border wall construction the day he took office on Jan. 20, 2021.

“It shall be the policy of my Administration that no more American taxpayer dollars be diverted to construct a border wall,” Biden’s executive order states.

Millions of dollars of unfinished border wall materials have lain in the deserts of Arizona since.

A report by Senate Republicans issued in July 2021 states that the construction stoppage is costing taxpayers $3 million per day.

The senators who produced the report estimated that the administration has spent between $618 million and $708 million on contractors between Jan. 20, 2021, and July 15, 2021, and will ultimately spend up to $1.2 billion more to exit the border wall projects.

“National security starts with border security. Biden’s border crisis deteriorates daily while the White House is silent,” he said in a press release. “Border communities like Yuma bear the burden of a broken border while narcotics poison our youth, human smuggling rises and mass amounts of migrants wear on our nonprofits.”

Term-limited as governor, Ducey has pledged to support GOP gubernatorial nominee Kari Lake, who will face Democrat Katie Hobbs in on Nov. 8.

Lake has pledged to declare the border crisis an invasion on day one, should she win.

Arizona Attorney General Mark Brnovich issued an opinion on the invasion clause in the Constitution on Feb. 7.

“The on-the-ground violence and lawlessness at Arizona’s border caused by cartels and gangs is extensive, well-documented, and persistent. It can satisfy the definition of ‘actually invaded’ and ‘invasion’ under the U.S. Constitution,” the Brnovich opinion reads.

“The federal government is failing to fulfill its duty under Article IV, Section 4 of the Constitution to defend the States from invasion. The State Self-Defense Clause exists precisely for situations such as the present, to ensure that States are not left helpless.”

As commander-in-chief for Arizona, Ducey has the power to “engage in defensive actions within its own territory at or near its border,” according to Brnovich.

Ducey has stopped short of enacting his power to use the National Guard and militia forces in such a way.