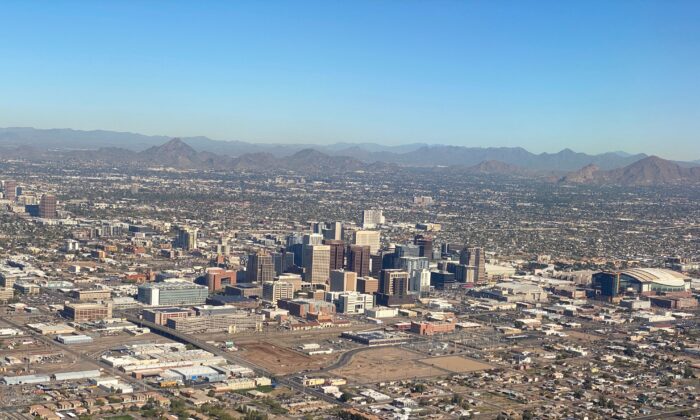 “I’m just getting off work,” a guy told me at 8:00 pm in the hotel elevator after I asked him how he was doing. “I’m a crane operator—85 hours a week,” he replied when I asked about his job.

There’s so much construction going on in the Valley of the Sun they are shipping in workers in skilled trades, putting them up hotels, feeding them, and paying them triple time. I didn’t ask his pay level, but it’s probably something like $200,000 a year.

A trip this week to Phoenix reminded me of Southern California when I arrived there in 1987 to write editorials at the Orange County Register. In the 1980s, California grew by 6 million people, or 25 percent. It gained seven seats in the House of Representatives and seven more electoral votes in the presidential election of 1992.

Now the Golden State’s luster has been tarnished. It has lost population the past couple of years. It will lose one seat in the House and one electoral vote in the 2024 presidential election.

Meanwhile, Arizona’s population doubled since 1990. After the 2020 U.S. Census, it is gaining one seat in the House and one electoral vote.

In Phoenix, growth is everywhere: massive new skyscrapers, apartment complexes, and especially factories. Not the old, smokestack factories as in Detroit where I grew up. But high-tech factories turning out chips and other devices.

Some of the new factories:

Moov Technologies has expanded operations 1,000 percent in recent years. In March, it moved its headquarters from Silicon Valley to Tempe. It recently announced that the company, “an online marketplace that sells used semiconductor manufacturing parts and equipment, has managed to profit during the global chip shortage.”

Intel has increased its chip fabrication labs from four to six.

CP Technologies, an Israeli company and maker of rugged and specialized computer hardware, in June broke ground on a new plant in scenic Prescott, 90 miles northwest of Phoenix. According to an announcement, “The company has already joined forces with Embry-Riddle Aeronautical University and Yavapai College to foster an innovative ecosystem and plans to leverage the impressive talent produced by these educational institutions in its hiring efforts. CP Technologies’ goal is to bring an additional 200 jobs to the area over the next four years.”

Taiwan Semiconductor Manufacturing in June announced it was starting construction on a new $12 billion chip plant. This is highly significant. Taiwan Semiconductor is the sole manufacturer of some of the world’s most essential chips. When strategists talk about the People’s Republic of China invading Taiwan, a concern always comes up: What would happen if this chip plant were destroyed? The global chip shortages would make today’s problems look like a minor glitch. Putting a plant in America makes obvious good sense. And they chose Arizona.

But aren’t things better in the states with no state income taxes, such as Texas, Florida and Nevada? I asked that of Patrick Ptak, senior vice president of executive initiatives at the Arizona Commerce Authority. We met in his fourth-floor office in downtown Phoenix, with a panoramic view of the city. I could see construction cranes raising tall buildings everywhere.

He said Phoenix is “incredibly competitive” because of its “total package.” In June, Gov. Doug Ducey signed into law a flat tax of just 2.5 percent. The previous complicated tax code maxed out at 4.5 percent. Ptak said his state also has lower property and other taxes.

“You have to get the taxes from somewhere. We also have a straightforward incentive structure. We don’t do backroom deals with discretionary funds,” something other states do, he said.

I asked about the labor force, mentioning the crane operator shipped in from another state. Also, other states, including California, have seen their labor forces reduced not just during the pandemic, but even after unemployment insurance for most was cut in September.

“In March our labor force grew back above pre-pandemic levels,” he said. High-tech workers especially are being developed. Intel has a deal with Arizona State University, much as Silicon Valley has with California universities. On that, they’re still learning from their western neighbor.

Ptak especially emphasized Arizona has “affordable, reliable energy.” He brought up the problems Texas had with its power grid earlier this year during cold weather. That’s why Microsoft and Facebook now are putting massive new data centers in Arizona. “No blackouts,” Ptak said.

Finally, Arizona isn’t shy about building houses, condos, and apartments to house all those new workers. Median prices for homes are a third of those in California. Sure, the beach isn’t nearby. But who can afford to go to the beach if you’re working three jobs just to catch a glimpse of the California Dream?